There is a Resurgence of ‘Ex-Gay’ Programs. We Must Beat Them at their Own Game 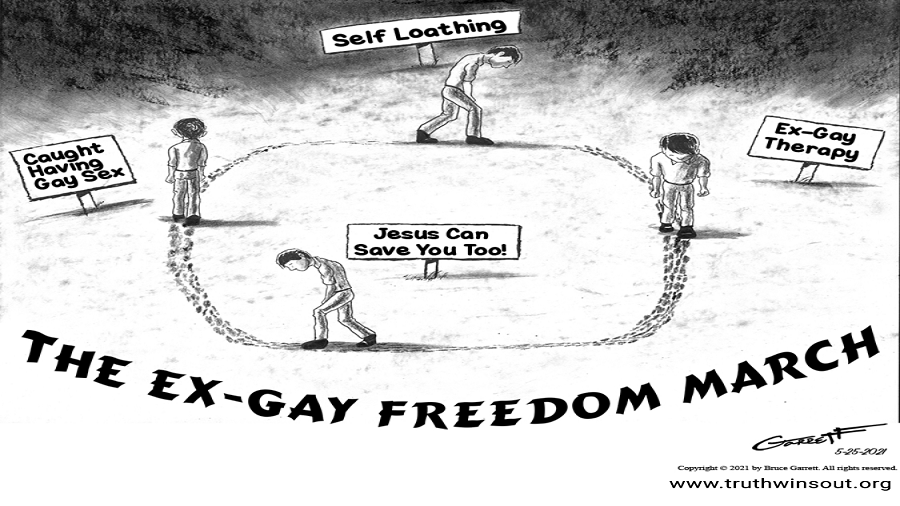 When Exodus International, the world’s largest “ex-gay” organization, shut down in 2013 because its leaders said nobody had changed their sexual orientation or gender identity, hopes were high that we had ended this scourge. Unfortunately, much like having to revisit voting rights or Anti-Semitism, it turns out that old prejudices die hard. There is an international resurgence of conversion groups that have surprisingly come back stronger than ever. They are effectively using social media to flood the Internet with bogus messages of “healing” and “transformation”.

The difference between the “ex-gay” movement that we crushed in 2013 and the one that has rebooted in contemporary times, is that our foes have become more sophisticated and produce better propaganda. There are notable improvements in their storytelling ability, with groups like Uprooted Heart “delivering testimonies by means of visual media of men and women who have found freedom in Christ.”

Uprooted Heart peddles a slick book, Changed, which is “a compilation of inspirational stories of men and women who have come out of homosexuality.” They hawk an “ex-gay” documentary, Here’s My Heart, which offers emotional testimonies with high production values. The American Family Association offers its own conversion documentary, In His Image. Restored Hope Network, whose mission is to “declare that Jesus has life-changing power for all who seek Him”, has an interactive map so LGBTQ people can “find help today”. Brother’s Road offers seminars to “Hack Your Sexual Fantasies”, as well as “ex-gay” camping weekends in various countries, including the U.S., Israel and Poland.

“Ex-gay” organizations have also improved their staging of public events. The Freedom March will take place June 4 on Washington, DC’s National Mall. While relatively few people will attend this event, there will still be enough participants for a competent video editor to make a scant crowd appear significantly larger. Freedom March propagandists will then adroitly disseminate their finished products on social media in an effort to exploit desperate and vulnerable LGBTQ people, particularly youth who are pressured by their family or church to “change”.

“Ex-gay” activist MJ Nixon explains how online content caused her to join the conversion bandwagon. “The Bible was the greatest resource in my journey of freedom from homosexuality, along with videos of former LGBTQ members on YouTube and Vimeo”.

If you’re waiting for social media companies to block this dishonest and destructive content, don’t hold your breath. In July 2020, one LGBTQ organization prematurely sent out a  press statement announcing that it had partnered with Facebook to stop “ex-gay” lies. Sadly, my skepticism at the time proved to be correct. The social media giant has failed to deliver, with the Freedom March recruiting members to its DC event on Facebook to this day.

While recent laws prohibiting licensed therapists from practicing conversion therapy on minors are helpful, they are no panacea. Most people don’t realize that these laws are quite limited in scope. For example, if you are eighteen or older, there are no protections. Conversion therapy laws in the United States also don’t stop religious conversion practices, even though “pray away the gay” programs represent the overwhelming majority of such efforts.

Some of these anti-conversion therapy laws are brazenly circumvented. For example, California-based ministry, Equipped to Love, offers a breezy disclaimer denying that they engage in conversion therapy. They cunningly rebrand their  efforts “consulting”, when, by all appearances, what they do looks very much like old fashioned “ex-gay” therapy protected by a thin veneer of religiosity. For $100 a month, one can receive “a free consulting appointment” with ministry founders Ken Williams or Elizabeth Woning. Equipped to Love also offers an online course, “Pastoring Homosexuality”, that purportedly assists “pastors guide their congregation to address homosexuality with a hopeful, yet sacred view.”

Living in the age of Zoom makes outlawing “ex-gay” conversion programs as difficult as stopping tax evasion in a world with secretive online and offshore banking services. There will always be ways to dodge anti-conversion laws or host online “consulting” services in more favorable jurisdictions at home or abroad.

There is no shortcut to countering the “ex-gay” resurgence. We must defeat them at their own game by producing superior resources and disseminating them worldwide via social media. To this end, Truth Wins Out is launching a comprehensive and innovative new online video campaign to challenge a rebooted “ex-gay” industry. This effort is designed to overwhelm “ex-gay” propaganda with an unprecedented 100+ ads in a single year. Truth Wins Out will release new ads weekly, beginning on June 4, one day prior to the June 5 “ex-gay” Freedom March in Washington, DC.

Truth Wins Out’s historic campaign will come in three waves. The first will be “Love Yourself, Live Your Truth”, which challenges “ex-gay” conversion messages with the wisdom of survivors, clergy, parents, scientists, mental health professionals and former “ex-gay” leaders, who now say that conversion programs don’t work and are harmful. The second wave is the “It’s So Weird” campaign, a hard-hitting, high-impact effort which highlights the creepy and bizarre methods used by “ex-gay” conversion quacks.

The ad campaign’s third wave is “It’s Dangerous”. While people rightfully mock the ridiculousness of “ex-gay” practices, the impact they have on the lives of survivors is no laughing matter. “It’s Dangerous” demonstrates that conversion efforts cause anxiety, depression and self-destructive behavior, including suicide.

The “ex-gay” strategy is to hope the media and public have amnesia and forget their monumental past failures. They want to be seen as pioneers with a fresh message appealing to a new generation. We can’t let this happen and must use every tool at our disposal to remind the world that new conversion programs are simply a tired retread of older programs that shut down because they flopped.

Wayne Besen is the Executive Director of Truth Wins Out, a non-profit organization that educates the world on the harm caused by destructive “ex-gay” conversion programs, while fighting to eliminate anti-LGBTQ prejudice and discrimination.