About three weeks ago, I went to see the movie “The Eyes of Tammy Faye.”  I had two close friends who worked with her, and her ex-husband Jim, on their program and ministry called Praise The Lord (PTL).  After watching the movie, I have mixed emotions. One emotion was extreme anger, because of the glamorous lifestyle they had at the expense of the “little people” that sent small donations that could have instead been used for medicine, rent or food. In my second book, Jesus Speaks: Unmaking the Silver Screen Pre 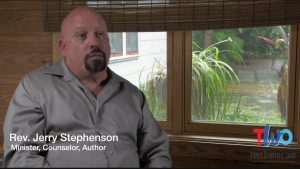 achers of Today, I talk extensively of the lavish lives of greedy, self-serving television preachers.

Only after these con artists are exposed as charlatans, or they die, do we get the real story. We finally see that they cared nothing about Christianity and were in it for the money, fame and sometimes sex. It makes my blood boil as these two-faced frauds exploit gullible people for their hard-earned money to support their fancy, hifalutin existences.

After PTL fell from a high-profile tabloid scandal, Tammy Faye had an awakening and admitted that she and her husband, Jim, had gotten caught up on the Hollywood scene and all that comes with it.  But she only saw the light after the late Rev. Jerry Falwell swept in with a hostile takeover of their PTL empire, conveniently casting aside the shamed Jim and Tammy Faye.

Because of Rev. Jerry Falwell’s own greed and evil doings, the Bakker’s lost everything and Jim landed in jail for five years committing fraud. But the late Jerry Falwell was also a disgrace to Christianity by his own actions. He flagrantly ignored the teachings of Jesus and gleefully judged other Christians, which he had no right to be doing.  Throughout Scripture it talks about not judging your brother. God is the judge. Perhaps, the narcissistic Jerry Falwell thought he was God?

Lately we have seen how Jerry Falwell, for all his bloviating on “family Values”, did a poor job raising his own son, Jerry Falwell Jr. Far from a decent man with integrity, Falwell Jr. made a mockery of everything he and his father allegedly stood for.  Who can forget the bizarre love triangle with his wife and a hot Miami pool boy? Then pictures surfaced of Falwell Jr. with some friends at a rave bar where sex, drugs and techno are known to accompany hard partying.  I guess the late Jerry Falwell Sr. should have been looking at his own family instead of looking to judge others.

This seems to be the MO of those who arrogantly stand in their Evangelical Empires preaching the gospel but taking other people’s money for their own gain.  It no doubt has hardly anything to do with reaching people with the love of Christ. For these frauds, the idea of ministering to other people is only a slick disguise to mask their mendacity and love affair with earthly things. They forget the riches in Heaven, for a quick buck.

One reason that Jerry Falwell Sr. brought down Jim and Tammy Faye, was because they had love for homosexuals and sometimes included them in ministry.  I knew two of their gay staff and they had nothing but good words for Tammy Faye who loved people no matter their sexuality.  On the other hand, Jim Bakker has started a big new ministry in Branson, Missouri and hasn’t learned the right lessons from his stint in prison.

As I said in the beginning, I had mixed emotions about the movie.  Unfortunately, Jim and Tammy Faye Bakker coveted the life they had seen from the extraordinarily wealthy Pat Robertson and his lavish ministry. Jim and Tammy Faye Bakker’s intentions were sharing Christ with the world, but somewhere along the line, just like the other televangelists, lost sight of the Gospel Message. They were guided by ego and greed, which led to their downfall.

It is my prayer that people will wake up these types of ministries that take more than they ever give.  Tammy Faye, I believe, finally got the message before she died.  Jim is cooking up, who knows what, in his new ministry. The late Rev. Jerry Falwell never got it and died of a massive heart attack in his office.

Each one of us one day will take that road to death and then we will answer to God for what we have done for His good and not ours.  All the things of this earth will pass away and then those of us who believe will see God and be praised for our doing what Jesus said:  “Love the Lord your God with all your heart, soul and mind.  Secondly, love your neighbor as yourself.  Upon this is the whole Law built.”