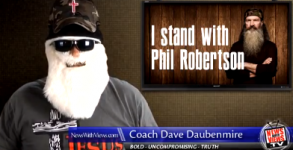 You’ve heard by now, because the Right has been going nuts about it all weekend, that Dan Savage spoke to a group of high school

I could spend a lot of time rebutting this List of Whine Gary Cass of the Christian Anti-Defamation Commission has put out, pointing out, as

It’s been a while since we’ve posted a video from Molotov Mitchell of WorldNetDaily. He’s a sad attempt at right-wing humor and “biting” commentary, which

Surprise, everybody, it’s The Holidays [I just victimized a buncha Fundamentalists right there, I sure did], which means that while the normal people of America

This is NOM’s latest episode of “Grown Adults Bitching and Moaning,” and it features a man named Damian Goddard, who used to be a sportscaster

Because it’s the end of the week and because the answer to the question, “What on earth is wrong with wingnuts?” is always basically the

There is Going to be Nookie on the Television Tomorrow Night

Straight nookie and gay nookie! Bryan Fischer and one of his wingnut colleagues are upset about it. That is all

For Professional Victims, Brick Thrown Through Window Is “Terror-Attack”