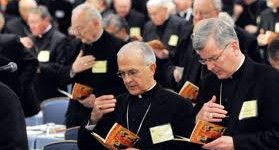 The Catholic Bishops seek special rights, working to exempt religious people from healthcare rules the rest of us have to follow.

Remember back in November of last year, when the United States Conference of Catholic Bishops (USCCB) held a general meeting in which they ignored issues

As we all know, the leaders of the American Roman Catholic Church are engaging in an all-out campaign of spiritual bullying and religion-based bigotry against

The United States Conference of Catholic Bishops is meeting in Baltimore today. According to NPR and the Associated Press, the main focus of this meeting

Earlier in the week, Truth Wins Out slammed Catholic extremist Daniel Avila for a radical article he wrote in the Boston Pilot that suggested that

Remember Daniel Avila, the Massachusetts attorney who advises the United States Conference of Catholic Bishops on marriage policy (AKA how to exclude same-sex couples from