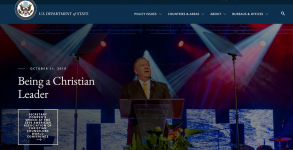 Uganda is exploiting vacuum in US leadership and sees the distain for basic human rights by White House, State Department

This is good news, but the fight obviously isn’t over: Uganda’s parliament has adjourned without debating a controversial bill which includes the death penalty for

The motto for anti-gay conservative leaders lately seems to be, “When in backwards Third World societies, relax and be how you really are.” Jeff Sharlet,

Lovely. Watch the video. Then I have a correction and a question: Correction: Molotov Mitchell claims that the Ugandan anti-gay legislation only calls for the