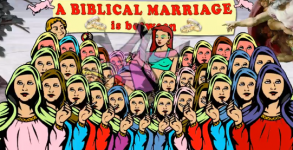 “Traditional Marriage” Not So Good For Women

Zack Ford has a piece up today, reporting on a study that’s been done on “traditional marriage,” i.e. the kind which is not only one man

It’s widely known that Newt Gingrich’s history of it being All About Him and his ambitions goes back a long way, but this news is

OH, funny! Amy Koch is the erstwhile Senate Majority leader in Minnesota who resigned after admitting an “inappropriate relationship” with a staffer, all while being

Not much to say about this, except that it’s happening. Long, you’ll remember, is the Atlanta megachurch pastor who got in hot water last year

The Ever-Evolving Definition of ‘Traditional Marriage’

My only question is this:  How many of these changes is the Religious Right actually happy with? I mean, we know Phyllis Schlafly probably doesn’t

Leader of Montana Teabaggers Jokes About Anti-Gay Violence on Facebook

This is a nice way to wake up on Friday morning.  Via Andy Towle, we learn that Tim Ravndal is the president of Montana’s Big

Betty Bowers, America’s Best Christian‚Ñ¢, gave an exclusive interview to Instinct magazine, and it’s a must-read. One thing I noticed, though, is that her satire

Never did it occur to me that this would have to be pointed out, but I was arguing with someone about equal marriage rights on