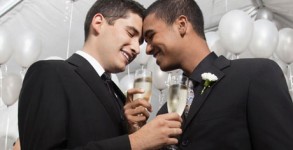 Science: Gay Couples Without Kids Have The Happiest Relationships

An interesting study is out which shows that, among committed couples, both straight and gay, monogamy is going up: Data on gay and heterosexual couples

Truth Wins Out praised the Presbyterian Church for ratifying an amendment to its constitution allowing the ordination of openly gay people in same-sex relationships. After

Peter LaBarbera Supports People Dying Without Their Spouses By Their Bedside, Etc.

Period. Wonder what he thinks about the genocide bill in Uganda. OH WAIT, let me guess!

Focus on the Family yesterday criticized the American Medical Association for spelling out, in detail, the plain truth: Christian Right discrimination against LGBT couples and

Evangelical antigay lawmakers in South Carolina have amended a bill originally intended to stop teen dating violence, so that the legislation excludes gay teens. The

Much like its allies at Exodus International, the Family Research Council opposes any specific law that explicitly gives lesbian and gay couples hospital-visitation and estate

I’m not female, I don’t live in a depressed area, and my parents don’t live in my basement. But the plight of a middle-aged woman