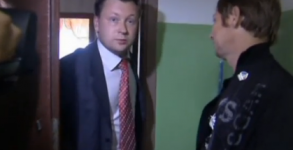 According to reports, an anti-gay member of parliament lodged a complaint against Nikolai Alexeyev

Update on Anti-Gay Law in Russia

The U.S. State Department is “deeply concerned” about Russia’s proposed legislation, which would make it a crime to publicly “promote” LGBT issues, and which equates

According to Gazeta.ru, two Russian oblasts (provinces) now outlaw “gay propaganda,” St. Petersburg and Moscow are considering doing so, and soon criminal prosecution of such