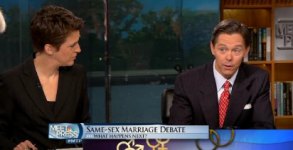 Anti-gay activists are very careful with their speech these days and now rely on code words that everyone understands. The first phrase is “traditional marriage.”

Senator Jim DeMint, who is probably the most embarrassing member of the United States Senate overall, is extremely concerned about President Obama’s nomination of a

America’s dumbest Senator is making a statement: Senator Jim DeMint (R-SC) is the latest Republican who has chosen to skip this year’s Conservative Political Action

What can be said about last night’s election that hasn’t been said about malignant tumors?  Okay, let’s look at the good, the bad and the

All right, Weekly Round-Up, Random Ten, and then it’s Seacrest Out time for me.  Let’s hold hands and remember our week: On the gay teen

Jim DeMint is a special kind of bigot, really, but that’s how they make ’em in South Carolina: Addressing a group of conservative voters on

At Values Voters Summit, It’s All About Preaching

Sarah Posner is sitting through the muck of the Values Voters Summit, and after the first morning, it seems that, with the exception of Mitt