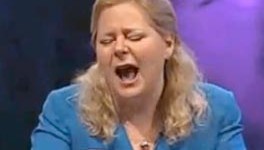 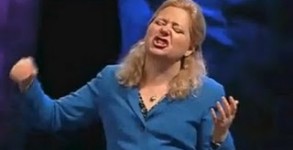 Janet Porter: The Most Dishonest, Sleazy ‘Christian’ In America

We would be offended, but our opposition's arguments come off as insane ramblings

Did You Know The AARP Is Secretly A Gay Rights Organization?

According to one of America’s most entertaining wingnuts, Janet Porter, it is.  Here’s what she said on the radio about the evil AARP: “Special rights

Thers @ Whiskey Fire: The Lord moves in mysterious ways, sometimes even sort of straight up and down with a firm grip mellowed by a

I’m just pointing it out because anti-gay wingnuts are always other kinds of messed up wingnuts too: A fetus has been scheduled as a legislative

For all the talk of a conservative resurgence prior to mid-term elections, there is mounting evidence that the movement is losing steam. The Virginian-Pilot reports

Janet Porter has no shame. Formerly Janet Folger, she launched the disastrous “Truth in Love” ex-gay advertising campaign in 1998, with 15 other anti-gay organizations.