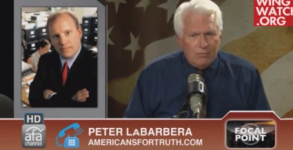 Fischer also says that demons in your brain make you gay

I have long-contended that one of the things that anti-gay wingnuts all have in common is that they’re extraordinarily melodramatic and juvenile. Here’s another example

Chris Matthews, are you listening? Because there is no association too strange for a Religious Right hate group leader to make when smearing LGBT people,

Tom McClusky of the Family Research Council hate group went to talk on on Janet Mefferd’s radio program and guess what? The sky is falling,

Wow. Randy Thomasson of Save California has always been one of the most uncomfortably unhinged of the anti-gay activists. I want to say “even for