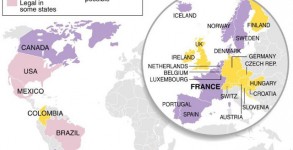 Peter Sprigg of the Family Research Council hate group is always cranky, but the Obama administration’s announcement that they would use foreign aid as leverage

Where Gays Have It The Worst

Foreign Policy has an interesting, and disturbing, round-up of the state of gay rights in the places around the world where it’s most dangerous, and

The Globalization of Gay Bashing

(Weekly Column) The latest anti-gay terrorism in Iraq — is gluing shut the anuses of homosexuals, while forcing the victims to ingest a form of

Jamaica prime minister Bruce Golding reiterated this week that he believes all Jamaicans should enjoy a right to privacy and equality — except same-sex-attracted Jamaicans.