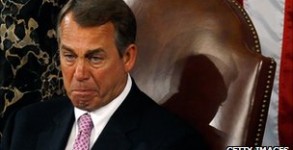 The end of the legal marriage fight is finally in sight

This is pretty cool: Today, we are excited to follow-up that announcement with the news that ten members of congress participated in the NOH8 ON

The Advocate: Legislation to repeal the Defense of Marriage Act will be introduced in the House on Wednesday by Reps. Jerrold Nadler, John Conyers, and

This is what happens when you hand the keys to overgrown malcontent children who never intended to actually govern in the first place: The House

What awful news: Rep. Gabrielle Giffords was shot in the head by a gunman at a public event in Tucson on Saturday. There are conflicting

Well, this is good news: On a 250-175 vote, and with at least 15 Republicans supporting the measure, the House of Representatives — in a

Let’s see if the eleventy billionth time is the charm: House Democratic leaders have decided to make one last push to repeal the military’s ban