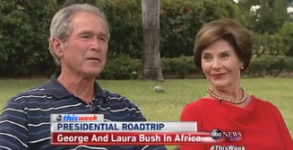 He doesn't go as far as endorsing marriage equality, but it's notable that he doesn't want to talk about it

The Shortest Rebuttal I Will Ever Give To A Wingnut

Look, it is a wingnut named Walter Williams, talky-talking at ClownHall, about how smart people like Barack Obama are bad and stupid people like Sarah

Barack Obama More Christian Than Oprah and Glenn Beck, According to Protestant Preachers

This is the most pointless survey, and accompanying article, I have ever seen, at least this week. NASHVILLE, Tenn. – Protestant pastors overwhelmingly believe that

How quickly some forget what the last president was like.  From Dubya’s new coloring book memoir: By the time Dick came to the ranch to

Why America Isn’t Winning the War On Terror

Weekly Column Nearly a decade after religious extremists attacked the World Trade Center and the Pentagon, our nation’s anti-terrorism policy is in shambles. America is

An article in today’s New York Times says that as more Republican gays come out, overt gay bashing is on the outs in the GOP.

For many years, Ken Mehlman worked to prop up elected anti-gay bigots, including running the virulently anti-gay reelection campaign of George W. Bush in 2004.

There Goes The Neighborhood…

Apparently, Ken Mehlman is my new neighbor. For those who don’t remember, he was the Bush administration’s campaign stooge who resigned as chairman of the