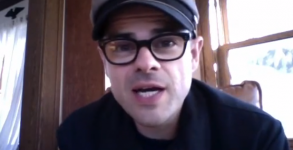 Not All Like That: Jay Bakker, Bishop Gene Robinson, Mel White, Ray Boltz And More!

This is a sad example of just how far Christian wingnuts will take their campaign against gay people, and just how personally they administer it.

Bishop Gene Robinson: It Gets Better

If you haven’t seen it, here’s Bishop Gene’s contribution to Dan Savage’s It Gets Better project. It’s awesome to see him and other religious figures

Truth Wins Out co-hosted a press conference on Tuesday announcing the American Prayer Hour. The purpose of the APH, which is Thursday, February 4, is

(Moses, pictured left, is a gay Ugandan seeking asylum in the U.S. who had to hide his face at today’s press conference. He feared persecution

Southern California already had its hands full with an invasion of giant squid when another squishy invertebrate washed ashore. At the Episcopal Church’ conference in

Excerpt from Daily Telegraph (London) The president is now taking spiritual guidance from no less than five different pastors, whom he phones for advice at

Robinson To Appear On President’s Platform?

UPDATE 2: It appears that the Team Obama has responded. Gene Robinson’s website said that, “One addendum to yesterday’s posting: I have been invited to