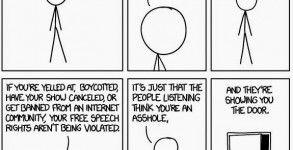 When Kameron Slade’s fifth-grade class at PS 195 in the New York City borough of Queens held a speech competition, he decided to speak on

A ‘Right’ to Force Merchants to Market Antigay Apps?

Two days after Apple removed Exodus International’s rule-breaking antigay app from its online retail store, the app is — for thousands of people who downloaded

No, AfterElton, The Remedy Is Not ‘Worse Than The Cure’ [UPDATED]

As you all know, Apple pulled the bigoted Exodus iPhone app after our petition drew over 150,000 signatures from customers demanding that the company treat

The support for our petition for Apple to remove Exodus International’s inherently bigoted iPhone app has been overwhelming.  As I hit “post” on this piece,

In a report that holds grave implications for liberal writers seeking to preserve freedom and equality, Ole Ole Olson writes on Alternet today about a

I don’t even like Adam Lambert. I don’t like American Idol. I did not watch the AMA’s. So, in reality, I do not care what

The Family Research Council on Feb. 26 sent out an e-mail to constituents which contended that penalties for felony violence threaten religious liberty. The enactment