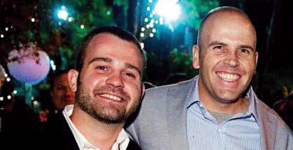 Tennessee Legislators Work To Blame Gay Teens For Their Own Suicides

The mark of a good wingnut is to never take responsibility for the harm their cohort inflicts on society. It really doesn’t matter what the

Vanderbilt University, one of the finest schools in the South and indeed, in the nation, has a strong anti-discrimination policy in place, which applies to

Recently, Tennessee passed a bill which prohibited its cities from setting their own non-discrimination policies, or rather policies which are stronger than the state’s own

The man shown above is pastor Steve Gaines of Bellevue Baptist Church in Memphis. Though he is not a resident of the city of Memphis,

This is the pink-shirted David Fowler, head of the cutely named Family Action Council of Tennessee [FACTn] [sic], standing on a playground and talking with

This is an actual ad being run by the Family Action Countil of Tennessee (“FACT” [sic]), in support of a big government bill [because social

Oh no, emergency in Nashville, you guys! A group of con­ser­v­a­tive busi­ness and polit­i­cal lead­ers gath­ered this morn­ing for an infor­ma­tional meet­ing about the “homo­sex­ual

It was tabled just a few weeks ago due to lack of support, but now it’s back: This morning, the [Memphis city] council’s personnel committee