By Wayne Besen In 2001, David Bianco was at the pinnacle of his career in GLBT journalism. He was the founder of Q Syndicate, a

Focus on the Family leader James Dobson released his attack dogs today, viciously smearing me because I have shown him to be dishonest and distort

By Wayne Besen The last few weeks have shown that so-called pro-family organizations are some of the most useless, money-sucking scams in the world. With

(Clownish AFA Says Ronald is Too Gay) Well, thank God we can finally eat McNuggets in peace without the yahoos at the American Family Association

David Benkof (formerly Bianco) – the gay writer turned anti-gay religious extremist – is getting published in mainstream newspapers. It is not because of his

By Wayne Besen Left, James Dobson It is remarkable that Focus on the Family’ James Dobson would accuse anyone of “distortions” considering his ignoble record. 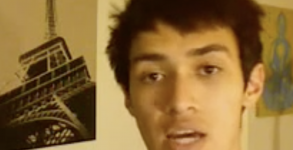 Crackpot "ex-gay" group told Vincent to quit singing and theater to make him straight. Ironically, the greatest actors of all are "ex-gay" activists pretending to