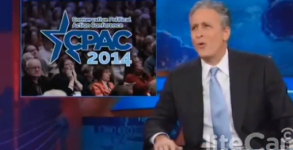 Jon Stewart’s CPAC Round-Up: ‘Burning Man For People Who Don’t Do Drugs And Are Afraid Of Fire’

Alternately: "It's Lilith Fair for dudes!"

Several years ago, conservatives were fawning over 13 year-old Jonathan Krohn, who gave a rousing speech at CPAC while promoting his book. A couple of

The Most Intelligent Argument Our Opponents Have Against Marriage Equality

Former actress/comedienne Victoria Jackson, speaking at CPAC: “I’m here to save America from communism. The people of California voted that they did not believe that

Right Wing Watch recorded a teabagger clown named Kevin Jackson who claimed at CPAC that the left wanted to change the definition of pedophilia. What

So you heard that the gay wingnut group GOProud, which really doesn’t do jack in terms of advocating for things which will help the LGBT

It’s kinda funny since it was the geniuses at GOProud who invited Donald Trump to CPAC in the first place, but there you have it:

CPAC Reportedly Breaking Up With GOProud

So much for “conservatives don’t hate us, really!”: GOProud, the advocacy organization for homosexuals that also portrays itself as “conservative,” reportedly will be left out