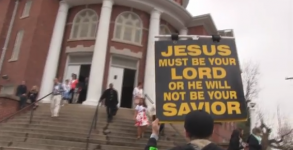 Pity This Child Flinging Homophobic Hate At Church-Goers On Easter

Kids learn from their elders. In this case, a child has learned to hate

You’ll need to turn the captions on this one, because this little boy is very quiet, perhaps sensing the low character of the ogre in

But not for the made-up reasons the Religious Right likes to use as talking points.  No, Tom Minnery of Focus on the Family testified before

It’s a wingnut victim story, y’all! Eunice and Owen Johns are a Pentecostal couple in the United Kingdom who are unwilling to care for all

Oh, Dr. Bumpkin, shut thy mouth up: Dr. Phil advises a parent whose son likes to play with girls’ toys and wear girls’ clothing to

FRC’s Peter Sprigg is Upset About Potty Language from Gays!

Oh, so Victorian… Tony Campolo once told a story to his audience that illustrated the point I’m about to make, and it was directed at

It’s too bad Isabella Miller-Jenkins’ other mother, Lisa Miller, is apparently a kidnapper. The Vermont Supreme Court has weighed in on the court order which