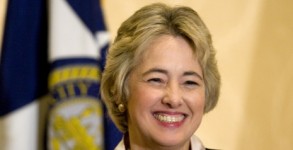 She really doesn't care what some "redneck wingnut" has to say

Wingnut Wants Us To Know That Lesbian Houston Mayor Is Gay

When the only attack they have left is calling their actually gay adversaries “gay,” it’s safe to say they’ve basically lost, I think: Back in

Annise Parker was elected mayor of Houston in 2009, and it made news across the country because she was the first LGBT person to hold