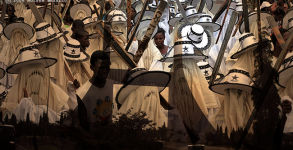 (Hey look, a story that isn’t about cheaply made fast food!) A new report has come out detailing the activities of the Religious Right in

Bryan Fischer Doubles Down on his AIDS Denialism

You see, if gay guys stop having sex and using poppers, all the AIDS will go away. Because that’s the problem with sub-Saharan Africa. It

Janice Shaw Crouse of the Concerned Women for America is very concerned! You see, the Obama administration is upping its contributions in the fight against

Sad State of Affairs in Africa

Ian Ollis, a member of the South African parliament, paints a sobering picture of LGBTQs’ legal and cultural status on the African continent. Recall that

Useful Information: Legality Around The World

Check out this interactive world map on the home page of the International Lesbian, Gay, Bisexual, Trans, and Intersex Association. It allows you to choose

Because Christian pastors had put his name onto a public blacklist, gay gospel singer Daniel Dyson fled the violently homophobic Uganda for the Bay Area.

As if they suspect that their efforts to pray gay people straight won’t suffice, Christians are now demonstrating against homosexuality in Ghana. Excuse me–“gayism.” Sigh.

Praying Away the Gay in West Africa

As we fight this particular culture war here in the US, let’s not forget things are as bad or worse elsewhere. Uganda’s persecution of gays