WASHINGTON – The nation’s most notorious conversion therapist, David Matheson, has quit the “ex-gay” movement and has announced he is seeking to date men. Matheson is the author and creator of several infamous “ex-gay” programs and bogus studies, as well as director for the Center for Gender Wholeness. Matheson has been featured in ABC News and The New York Times. 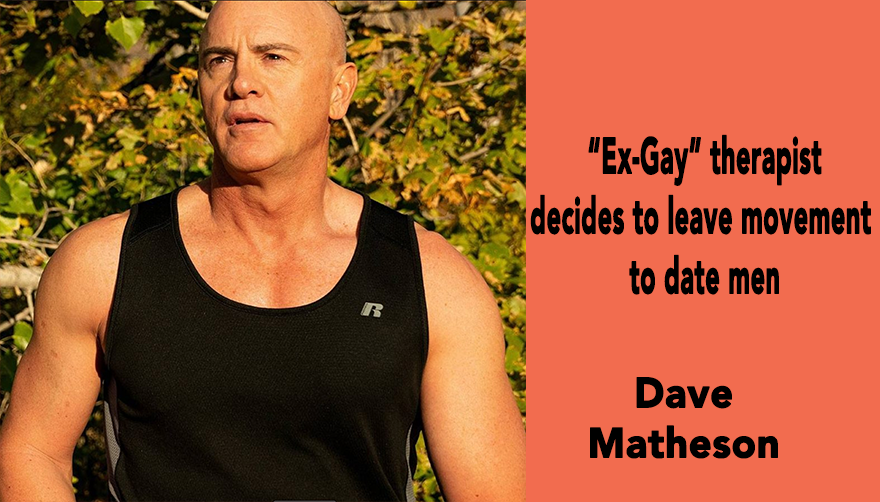 Journey into Manhood’s director, Rich Wyler, revealed the news in a post to a private Facebook group obtained by Truth Wins Out. “David…says that living a single, celibate life ‘just isn’t feasible for him, so he’s seeking a male partner,” according to Wyler’s statement. “He has gone from bisexuality to exclusively gay.” TWO contacted Matheson on Sunday evening and he provided a statement that was surprisingly unrepentant and failed to apologize for the grave harm he has caused many of his clients.

“My time in a straight marriage and in the “ex-gay” world was genuine and sincere and a rich blessing to me. I remember most of it with fondness and gratitude for the joy and growth it caused in me and many others. But I had stopped growing and was starting to die. So I’ve embarked on a new life-giving path that has already started a whole new growth process. I wasn’t faking it all those years. I’m not renouncing my past work or my LDS faith. And I’m not condemning mixed-orientation marriages. I continue to support the rights of individuals to choose how they will respond to their sexual attractions and identity. With that freedom, I am now choosing to pursue life as a gay man.”

While the latest news on Matheson further dishonors the already discredited “ex-gay” industry, some people harmed by his programs have greeted his announcement with mixed feelings.

“While I am pleased for Mr. Matheson that he has found a path forward for his life, I can’t help but think of the hundreds if not thousands of people who are still stuck in the closet, a closet that was created in part by Mr. Matheson himself. I hope that Mr. Matheson will do whatever he can to rectify the harm that he’s inflicted on many people in the LGBTQ community, myself included,” said Chaim Levin, who was psychologically harmed by attending Journey into Manhood, and was later a key plaintiff in the landmark Southern Poverty Law Center lawsuit that shut down Jews Offering New Alternatives to Homosexuality (JONAH). Matheson was also tied to JONAH.

TWO says that Matheson is living proof that these programs don’t even work for its most vociferous advocates.

“If conversion therapy does not work for authors like David Matheson who write books on the discredited practice, it is naïve to expect it to work for those reading such deceptive publications,” said Truth Wins Out Executive Director Wayne Besen. “Conversion therapy employs guilt and shame to browbeat desperate and vulnerable people into renouncing their humanity. This is the latest evidence that conversion therapy is consumer fraud and ought to be outlawed in all 50 states.”

A protégé of the late Joseph Nicolosi, the infamous therapist from the now defunct National Association for Research and Therapy of Homosexuality (NARTH), Matheson also co-wrote the program for Journey into Manhood, an absurd “ex-gay” program where gay men go into the forest to engage in “manly” activities in a fruitless effort to modify their sexual orientation. Matheson is the author of “Becoming a Whole Man,” which according to Amazon “is the result of a six-year quest to understand and respond to the most difficult challenges facing men with unwanted homosexuality.”

A big shot in the conversion therapy movement, Matheson co-wrote a paper in 2006 with recently scandalized conversion therapy proponent Norman Goldwasser, who Truth Wins Out revealed in November was cruising gay websites for sexual encounters. The paper, “Holistic Therapy: A Comprehensive, Clinical Approach to the Treatment of SSA”, is gratuitously anti-gay and extremely offensive, habitually confusing crass stereotypes with actual science. In one section, homosexuality, which is not a mental health disorder or disease according to the APA and AMA, is casually pathologized and compared to Obsessive Compulsive Disorder:

Matheson’s revelation is also important because Google is hosting a noxious “ex-gay” app targeting children. Truth Wins Out has launched a petition urging Google to drop the app, which has 45,000 signatures and counting.