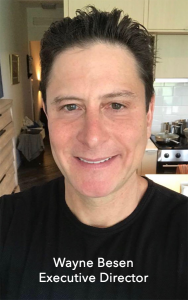 extremism and outing hypocritical “ex-gay” activists, reopened its doors today. In a video released to its supporters this morning, Besen explained that he decided to reenter the political arena because of the dramatic resurgence of hate and bigotry fomented by Donald Trump and his Republican Party quislings.

Last week, Truth Wins Out reminded its supporters why its work was critically important, going undercover and exposing Norman Goldwasser, a notorious conversion therapist who boasted he could cure LGBT clients of their homosexuality, while he secretly had profiles on the gay dating websites, ManHunt and Bear Nation.

“Who else does this kind of important undercover work that exposes the hypocrites and frauds?” asked Besen. The Goldwasser story went viral and appeared in the U.S., the E.U., Brazil, Israel, South Korea and New Zealand. Besen said that such impactful work was important with ancient scourges such as anti-gay hatred, toxic nationalism, anti-immigration fervor, racism, anti-Semitism and white supremacy resurgent throughout the globe.

“The time has come for me to reengage in our fight for freedom,” said Besen. “My sabbatical is over, because bigotry and hate has not taken a sabbatical. As of today, Truth Wins Out is open for business – effective immediately.

In a video address that was disseminated to Truth Wins Out supporters today, Besen added:

“Given the alarming state of the world, from Right Wing violence, to a presidency veering toward authoritarianism, to Vladimir Putin’s role in exporting homophobia across the globe, many of you have reminded me that Truth Wins Out was ahead of the curve in warning about the existential danger posed by right wing extremism.

With your support, I will dig deep with passion and resolve, and give you everything I have as we engage in the greatest struggle of our lives: Battling a corrupt administration and a spineless, quisling Republican Party that has put democracy in peril. If you give me a chance, I’ll also work non-stop at putting the remaining “ex-gay” programs out of business, once and for all. Not just in the U.S., but across the globe.”

In its 11 years, the organization had many notable accomplishments including: