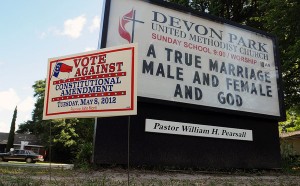 The extreme Right is on a phony crusade to protect its alleged loss of religious liberty. In reality, they are the ones who have long stripped away freedom from faith communities in which they disagree with. While laughably posing as victims, they have repeatedly violated the US Constitution’s establishment clause and force fed Americans state sponsored religion. In doing so, they have flagrantly violated the conscience of religious believers who hold different views.

This week, progressive religious leaders finally stood up and said enough to this double standard that illegally elevates fundamentalist and evangelical values above those sincerely held by more enlightened denominations. The United Church of Christ filed a lawsuit claiming that North Carolina’s restriction against clergy members blessing the unions of same-sex couples is an unconstitutional infringement on their religious liberties. A Lutheran priest, a rabbi, two Unitarian Universalist ministers, and a Baptist preacher joined the UCC in this case.

North Carolina allows clergy members to bless same-sex couples married in other states, but otherwise prohibits them from performing “religious blessings and marriage rites” for gay couples, and that “if they perform a religious blessing ceremony of a same-sex couple in their church, they are subject to prosecution and civil judgments.”

Where are FOX News, Sarah Palin, Newt Gingrich, and Mike Huckabee when you need them to stand up for religious liberty?

The New York Times calls the UCC suit a “novel legal attack on the state’s same-sex marriage ban,” but let’s hope this is the first of many such cases nationwide. Virtually every time gay marriage has come before the courts, the side representing equality wins. There simply is no rational basis to ban marriage equality, and opponents can only come up with narrow, religious arguments or pretend that marriage is exclusively about procreation. This amounts to state sponsored persecution and religious favoritism, since all religious faiths don’t share the same view.

Fundamentalism was deeply infused in North Carolina’s May 2012 referendum that constitutionally outlawed same-sex marriage. Less than a week before the vote, famed televangelist Billy Graham urged voters to ban gay marriage in his home state.

“Watching the moral decline of our country causes me great concern,” Graham said. “I believe the home and marriage is the foundation of our society and must be protected.”

This divisive issue touched off a wave of religious extremism. Pastor Charles L. Worley of Providence Road Baptist Church in Maiden, N.C., blasted President Obama’s endorsement of marriage equality by calling for gays and lesbians to be put in an electrified pen until they became extinct.

“Build a great, big, large fence — 150 or 100 miles long — put all the lesbians in there,” Worley preached: “Do the same thing for the queers and the homosexuals and have that fence electrified so they can’t get out…and you know what, in a few years, they’ll die out…do you know why? They can’t reproduce!”

Pastor Sean Harris of the Berean Baptist Church in Fayetteville said that parents should “punch” their male child if he is effeminate and “crack that wrist.”

The full list of prejudice pastors with backward beliefs in North Carolina is too long to recite in this column. However, it is clear that in the marriage referendum they falsely claimed to represent the “faith” view. The power of the UCC suit is that it boldly asserts that when the government writes one church’s rules into state law, by definition it is denying religious freedom to dissenting denominations with equally sincere beliefs.

Tami Fitzgerald, executive director of the North Carolina Values Coalition, personifies the astounding arrogance and hypocrisy these zealots represent. She blasted the UCC lawsuit, but in doing so revealed her side’s true message of intolerance and religious supremacy:

“It’s both ironic and sad that an entire religious denomination and its clergy who purport holding to Christian teachings on marriage would look to the courts to justify their errant beliefs,” Fitzgerald said in a statement. “These individuals are simply revisionists that distort the teaching of Scripture to justify sexual revolution, not marital sanctity.”

The Religious Right likes to incessantly whine about “political correctness,” but the flip side is “conservative correctness.” In the case of North Carolina, Fitzgerald made it clear that the state should discriminate against UCC because the denomination holds what she believes are “errant beliefs” that are not “conservatively correct” enough for her liking.

As much as they’d like to, Tami Fitzgerald, Pastor Charles L. Worley, and even the “great” Billy Graham don’t get to decide which beliefs are considered acceptable or authentic in North Carolina. This case should be a no-brainer in court, and it is time that true religious liberty is restored in the Tar-Heel state.