Today, the Chicago Sun Times published an op-ed I wrote about the Illinois House’s embarrassing failure to ban “ex-gay” therapy for minors. How many children will have to be mentally scarred before 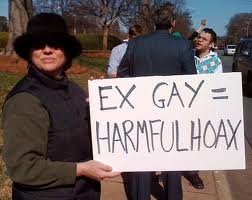 they get their act together? What a shameful dereliction of duty on the part of our state lawmakers. They need to correct their ill-advised vote as soon as possible.

The following is an excerpt from my op-ed:

Illinois House members failed to protect the mental health of vulnerable lesbian, gay, bisexual, and transgender youth when they voted 44-51 late last week against banning conversion therapy for minors. Allowing this ineffective and medieval practice to continue will cause, in the words of the American Psychiatric Association, “anxiety, depression, and self-destructive behavior” for many LGBT adolescents.

When expensive conversion therapy programs fail, some parents blame their own children for not sexually converting. The results of such family trauma can be dangerous, if not deadly. A 2009 study by San Francisco State researcher Caitlin Ryan, which was published in the Journal of the American Academy of Pediatrics, shows that LGBT teens who experienced negative feedback from their family when they came out were 8 times more likely to have attempted suicide, 6 times as vulnerable to severe depression, and 3 times more likely to use drugs.

It is important to remember that “conversion” therapy (aka reparative) isn’t really therapy at all. It is anti-gay malice disguised as medicine and nothing more than faith healing that adopts therapeutic language to appear legitimate. The practice in question is not taught in a single accredited non-religious university in the country. There are no peer review scientific articles supporting the idea that people can transform their sexuality. It is thoroughly rejected by every respected medical and mental health organization in the nation. This includes The American Medical Association, The American Psychological Association, The American Psychiatric Association, and the American Academy of Pediatrics.

So, why are Illinois lawmakers continuing to allow our youth to be guinea pigs for such a disreputable and damaging practice?

CLICK HERE to read the rest of my op-ed