CHICAGO – Truth Wins Out thanked Arizona Gov. Jan Brewer today for vetoing a noxious anti-gay bill disguised as an effort to protect “religious liberty.” The bill, SB1062, would have essentially allowed anyone in the state to 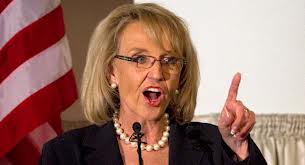 justify blatant and brazen discrimination against LGBT people in services or accommodations based on a declaration of sincere religious conviction. The bill was a nightmare that would have given citizens free rein to harm the lives of LGBT people and their families.

“Gov. Jan Brewer avoided going down in history as ‘Jan Crow’ by wisely vetoing this wolf in sheep’s clothing,” said Truth Wins Out’s Executive Director Wayne Besen. “If this bill had become law, it would have been a disaster for Arizona’s reputation and severely tarnished the governor’s legacy.

“This was a major defeat for what has become a concerted Hail Mary campaign to carve out special rights for religious conservatives so that they don’t have to play by the same rules as everyone else does,” said Evan Hurst, Truth Wins Out’s Associate Director. “In this new up-is-down world, anti-gay religious folks are ‘practicing their faith’ when they’re baking cakes or renting out hotel rooms to travelers. On the ground, these bills hurt real, live LGBT people.”

Having lost the culture war, social conservatives in several states are trying to place themselves above the law and carve out special rights to discriminate based on their faith. According to Mother Jones:

Republicans lawmakers and a network of conservative religious groups has been pushing similar bills in other states, essentially forging a national campaign that, critics say, would legalize discrimination on the basis of sexual orientation….the states with such bills are Idaho, Oregon, South Dakota, Tennessee, Kansas, Arizona, Hawaii, Ohio, Oklahoma, and Mississippi.