International Gay Rights Foes: If You Can’t Beat Them, Beat Them Up

We are about to enter an international house of anti-gay horrors. Before we do, however, the gay, lesbian, bisexual and

transgender movement should take a bow. It has been so extraordinarily successful that anti-gay forces no longer try to debate LGBT issues on the merits. They have ceded the logical arguments and reverted to barbarism – electing to suppress the gay movement through imprisonment, torture, subversion of the democratic process, the curtailing of individual liberty, and even outright murder.

By now it should be evident that the LGBT movement always wins when it can make its case. Sure, progress comes in fits and starts, and it might take decades to achieve equality, but the outcome is all but certain. When gay people come out to tell their moving stories, it changes hearts and minds and modifications in the law eventually follow. The LGBT movement has the dual advantage of superior logic and the ability to evoke powerful emotions that transform opponents into allies.

Conversely, anti-gay forces offer nothing but fear and lies. Our foes feed on ignorance and understand that education is the antidote, thus time is never on their side. There is a rapid shelf life on demonizing – which usually ends when people realize that the alleged demon is their own son, daughter, friend, or neighbor. Their weak case crumbles once people see that LGBT people aren’t threatening.

Left unimpeded, LGBT equality would win the day in virtually every corner of the planet within the next few decades, including many bastions of social conservatism. This is precisely why anti-gay activists have embarked on their new international strategy: “If you can’t beat them, beat them up.” They acutely understand that only violence prevents victory.

Whether it is Russia, Uganda, Nigeria, or other backward nations, what we are witnessing is coordinated terror campaigns specifically designed to stop the conversation, stifle debate, and slam the closet door shut. It is based on the principle that if speech is the enemy, cut off the tongue.

This attack on human rights and basic freedom is evident in Nigeria, where President Goodluck Jonathan just signed the Same Sex Marriage Prohibition Act, which is nothing short of an official act of government-sponsored terrorism. (A purge in northern Nigeria is already underway) According to the law:

Clearly, the crux of this monstrosity is an attack on freedom of speech and freedom of association. This law is dangerous for every citizen in Nigeria, because if the government can strip the most basic rights away from a benign minority, no one is truly secure or free from government oppression.

Furthermore, the law is useless and if the President thinks he did anything to curtail homosexuality in Nigeria, all I can say is “good luck Jonathan.” What the law does is severely tarnish Nigeria’s image abroad. Internally, the more resourceful LGBT people will emigrate, taking their talents to more tolerant nations, while the remaining homosexuals will live miserable, closeted existences. Many will marry opposite sex partners they are not sexually attracted to – exponentially increasing the misery in Nigerian society. Others will commit suicide or live like outlaws. With this repressive law, everybody loses and nobody wins – with freedom and justice taking huge hits in this notoriously corrupt nation.

Meanwhile, in Russia church officials are floating the idea that there should be a national referendum on criminalizing homosexuality.

“I’m certain that such sexual contacts must be entirely excluded from the life of our society,” Vsevolod Chaplin, (pictured) who heads the church’s department on engagement with society, said in an interview with the Interfax news agency. “If this can be achieved through means of moral persuasion, that’s better. If we need to involve the law then let’s ask the people if they’re ready for this.” 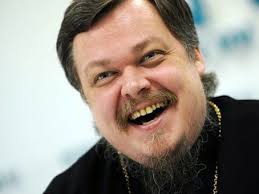 First, no majority is entitled to tell fellow human beings that in order to survive they must live sexless and loveless lives. This notion is a gross invasion of privacy and a violation of human rights that no civilized nation would impose on any of its citizens. Second, the idea of a fair vote is farcical considering that Russia has a totalitarian “propaganda” law that prohibits LGBT people from organizing or speaking in favor of equality. Chaplin is calling for a campaign where LGBT people are prohibited from campaigning and cynically calling it a democratic vote.

Let’s call this idea what it is: Fascism disguised as the majority exercising its freedom. It should come as no surprise that the referendum was first proposed by actor and defrocked priest Ivan Okhlobystin, who had previously called for burning all gay people “alive in ovens.”

One thing that stands out in countries persecuting LGBT people is the wanton cruelty. These are unconscionable laws designed to make the sadistic appear saintly and the malicious look moral. They are also symptoms of pathological societies that are going backwards and desperately trying to justify their failures by finding scapegoats for their dysfunction.

I am now going to introduce “Besen’s Rule” on international issues: “A nation’s stability and commitment to democratic principles is directly tied to how it treats its LGBT citizens.”

As I stated earlier, LGBT rights succeed wherever the gay population has the freedom to speak out and has the ability to safely organize free of violence and persecution. Thus, a country without gay rights is almost always a rogue nation with limited free speech, a dearth of personal liberty, authoritarian governments, corrupt institutions, questionable elections, and a tainted judiciary.

If businessmen want to know whether a country is safe to invest in – they can save themselves a lot of time and money by simply looking at how that nation treats its gay citizens. Any time one group of people is deemed outside of the law – the law itself is fungible and can be conveniently tuned on those deemed “enemies of the state.”

Ask yourself a question: Are there civilized, free nations that are moving forward where LGBT people are severely persecuted? The answer is evident.