The “ex-gay” industry may have hit rock bottom today. It held a press conference at the New Jersey statehouse where they invoked the
name of Jerry Sandusky to oppose a bill prohibiting “ex-gay” child abuse against minors.

“It’s certainly a new low,” said T.J. Helmstetter, spokesman for Garden State Equality, the state’s largest gay rights organization. “It takes a lot for me to be shocked in the state of New Jersey, especially in dealing with the people you just heard from.”

The “ex-gay” activists are relying on junk science to make two bogus points:

According to a NJ.com article about the press conference:

Gregory Quinlan (pictured), director of government affairs for New Jersey Family First, said at a press conference today sexual feelings towards the same sex can develop as a result of molestation.

“We’d be denying the child the discovery of why they’re having those feelings, which is why we’re calling this the ‘J
erry Sandusky Victimization Act,’” Quinlan, who describes himself as a former homosexual, said. “It is a correct link.” 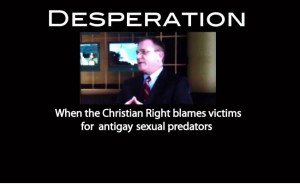 As the article points out, the actual experts who rely on real science don’t agree with Quinlan (no mental health training) and Doyle (Jerry Falwell U, AKA Liberty University). According to the American Psychiatric Association’s website:

“No specific psychosocial or family dynamic cause for homosexuality has been identified, including histories of childhood sexual abuse,” it says. “Sexual abuse does not appear to be more prevalent in children who grow up to identify as gay, lesbian, or bisexual, than in children who identify as heterosexual.”

Here is what real scientists say about the false links brought up by Quinlan and Doyle:

That opponents are calling it the “Jerry Sandusky Victimization Act” should make it clear to New Jersey lawmakers that “ex-gay” therapy supporters lack character, are unprofessional, and promote pseudoscience at the expense of children.