Gay Marriage Might Cause the GOP To Divorce the Religious Right

The Republican Party has a gay marriage problem that seems intractable, at least in the short term. 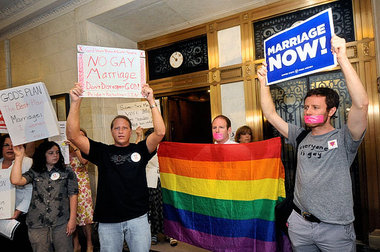 On one side of the party divide is the Religious Right, which provides money and manpower to help get candidates elected. They effectively use primaries to position themselves as gatekeepers, using fear and sometimes meting out punishment to those who buck the socially conservative Party Line.

Standing on the other side is a growing chorus of Republicans who see a conservative case for marriage equality. Ted Olsen, who is suing to overturn Proposition 8, a California constitutional amendment banning same-sex marriage, represents this group. This week, dozens of key Republicans — including top advisers to former President George W. Bush, four former governors and two members of Congress — have lent their name to a legal brief supporting a constitutional right to marry for gay couples. As the New York Times’ Sheryl Gay Stolberg points out, this is an extraordinary move because it is a “direct challenge to Speaker John A. Boehner and reflects the civil war in the party since the November election.”

An ultimately fatal problem for anti-gay marriage activists is that conversions appear to be a one-way street. For example, in 2011, Louis Marinelli, a former organizer for the National Organization for Marriage reversed his opposition, explaining: “Too many see support for gay rights as strictly a liberal issue. That’s a mistake. Supporting the constitutional rights of all citizens is a conservative issue, too.”

(Video from Faith in America)

There are virtually no defections on the pro-same-sex-marriage side. Once people see the light on this issue, they have no desire to return to darkness. As former Congresswoman Deborah Pryce (R-OH) explains: “Like a lot of the country, my views have evolved on this from the first day I set foot in Congress. I think it’s just the right thing, and I think it’s on solid legal footing, too.”

Former Utah Gov. and presidential candidate Jon Huntsman added: “I’ve been married for 29 years. My marriage has been the greatest joy of my life. There is nothing conservative about denying other Americans the ability to forge that same relationship with the person they love.”

The conservative conundrum is that all of this new support comes from former GOP representatives. Those currently in office are walking on eggshells not to upset their extremist masters. The polls reveal the tricky dance faced by Republican candidates and officials. To be a majority party they must appeal to mainstream Americans who back same-sex marriage. However, a substantial portion of the Party’s base is still in opposition, though it is shrinking. According to the today’s New York Times:

A majority of Americans now favor same-sex marriage, up from roughly one third in 2003. While Republicans lag behind the general population — the latest New York Times survey found a third of Republicans favor letting gay people marry — that, too, is changing quickly as more young people reach voting age. Several recent polls show that about 70 percent of voters under 30 back same-sex marriage.

The demographic changes must terrify Republican operatives. For example, 1.25 million more young people supported Obama in 2012 over 2008. The gay marriage position of the GOP is largely responsible for turning off these young voters. It 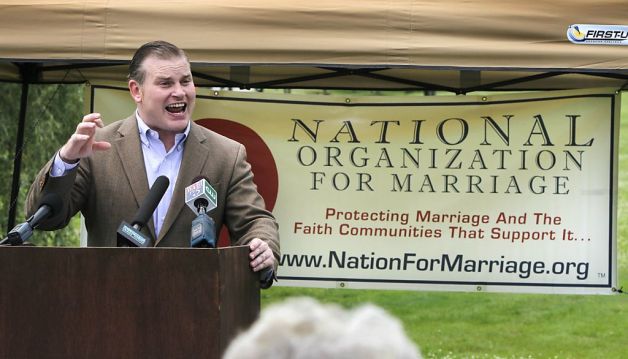 is even making it difficult to recruit smart young college graduates to help with the GOP’s high tech voting outreach efforts.

“I know a lot of people who do technology for a living,” said Michael Turk, who the New York Times magazine described as a Republican digital guru. “Almost universally there’s a libertarian streak that runs through them…And almost to a person that I’ve talked to, they say, ‘Yeah, I would probably vote for Republicans, but I can’t get past the gay marriage ban, the abortion stance, all of these social causes’…So questions about whether you can be married to the person you want to just flies in the face of the future. They don’t want to be part of an organization that puts them squarely on the wrong side of history.”

Smarter Republicans are realizing that opposition to marriage equality is based on the fundamental lie that marriage will be “redefined.” In reality, it will only expand the institution, but not alter it, because heterosexuals will be still be marrying opposite sex partners. Absolutely nothing changes for straight couples already married or those wishing to marry.

1) Dig-in and drag down the entire Republican Party.
2) Deemphasize the issue by letting Republicans vote their consciences without repercussions.

I’m placing my bet on option one. Wouldn’t it be sweet irony if gay marriage finally caused the Republican Party to divorce the Religious Right?

UPDATED: List of Republicans who signed onto the Amicus Brief:

Tim Adams, Undersecretary of the Treasury for International Affairs, 2005-2007

Michele Davis, Assistant Secretary for Public Affairs and Director of Policy Planning, Department of the Treasury, 2006-2009

Mark Gerson, Chairman, Gerson Lehrman Group and Author of The Neoconservative Vision: From the Cold War to the Culture Wars and In the Classroom: Dispatches from an Inner-City School that Works

Stephen Hadley, Assistant to the President and National Security Advisor, 2005-2009

Margaret Hoover, Advisor to the Deputy Secretary of Homeland Security, 2005-2006

Greg Jenkins, Deputy Assistant to the President and Director of Presidential Advance, 2003-2004

Robert Kabel, Special Assistant to the President for Legislative Affairs, 1982-1985

David McCormick, Undersecretary of the Treasury for International Affairs, 2007-2009

Connie Morella, Member of Congress, 1987-2003 and U.S. Ambassador to the Organization for Economic Co-operation and Development, 2003-2007

Noam Neusner, Special Assistant to the President for Economic Speechwriting, 2002-2005

Steve Schmidt, Deputy Assistant to the President and Counselor to the Vice President, 2004-2006

Robert Steel, Undersecretary of the Treasury for Domestic Finance, 2006-2008