I have been tough on the Roman Catholic Church of late, but that is because they have earned every bit of my wrath. Under Pope Benedict XVI, the church has 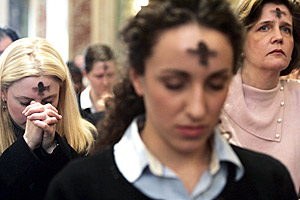 Exactly, why should I or any other thinking person have kind words to say about such a backwards and intrusive institution that has harmed so many people?

It’s is one thing for the church to dictate rules to its own followers and quite another to stick their noses into laws that govern my life. If I wanted to obey the Pope, I would have signed up for his church during the last membership drive. If I wanted to live a Catholic life, you would find me at church on Sundays, instead of watching football from the comfort of my own home.

However, I chose not to join — yet under he reign of Pope Benedict XVI, the Vatican did not get the memo and kept trying to influence elections to ensure I bowed to the Pontiff against my will. If Rome wants to play politics in the secular world, they can expect push back and fair criticism (and even the occasional rumor). Each time they disparage my sexual orientation, dehumanize my existence, or dismiss my same-sex marriage, I won’t hesitate to bring up the $3 billion Rome has spent to pay off victims of child raping priests. The Vatican should fully understand that the days of bullying people without a swift and unsparing response are over and will never  return.

I am not asking for the Roman Catholic Church to agree with me. However, I am demanding that they — as well as other religions that I did not sign up for — stay the hell out of my life. As long as this church keeps intruding where it has no business going, we will have issues.

It would be wise of Rome to listen to American Catholics who tend to share my view of the church and the need for radical change. If a crusty old replica of the last pope emerges from the conclave to take the throne, Catholicism will continue to deteriorate in the West. A New York Times/CBS poll sheds some light on the direction American Catholics hope the church takes: 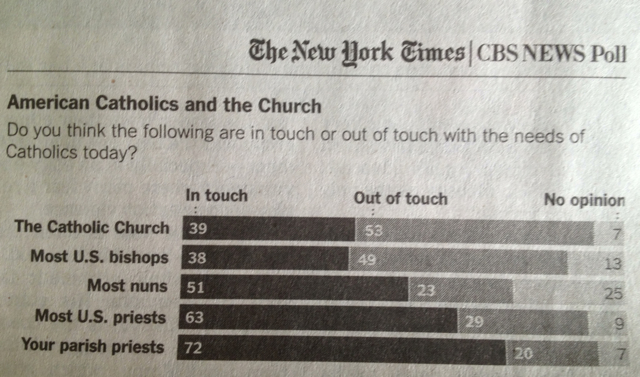 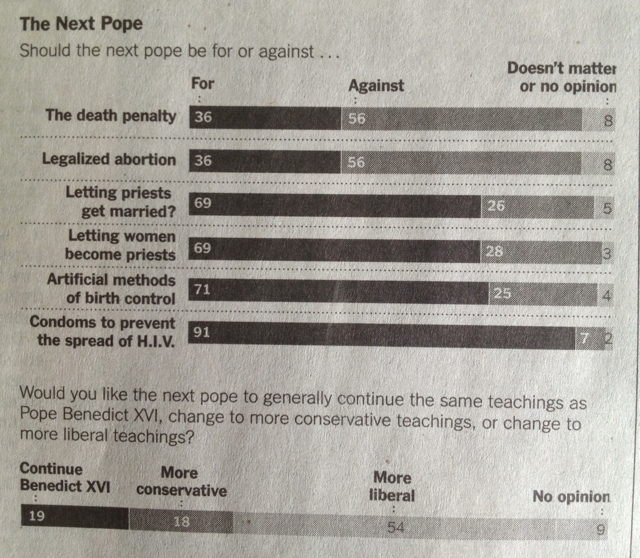 This poll offers insight and a sliver of hope that the Vatican can change and join the modern world. However, this is dependent to Rome listening to the views of its members, which it has shown no sign of being able to do in the past. It is my view that if the new Pope goes down the familiar path, American Catholics leave the church until genuine reforms are offered.

Look at it this way, why would a restaurant change its menu if the customers keep returning? It is up to American and European Catholics to tell the chefs they need a new recipe and a fresh plate of ideas or they will do their spiritual dining elsewhere. If these Catholics are not bold, they shouldn’t be surprised when the new Pope serves up the same tired, unappetizing dish on the same old plate.