Fascism has arrived at America’s doorstep and at least one-third of Americans are proudly saluting and goose-stepping. When 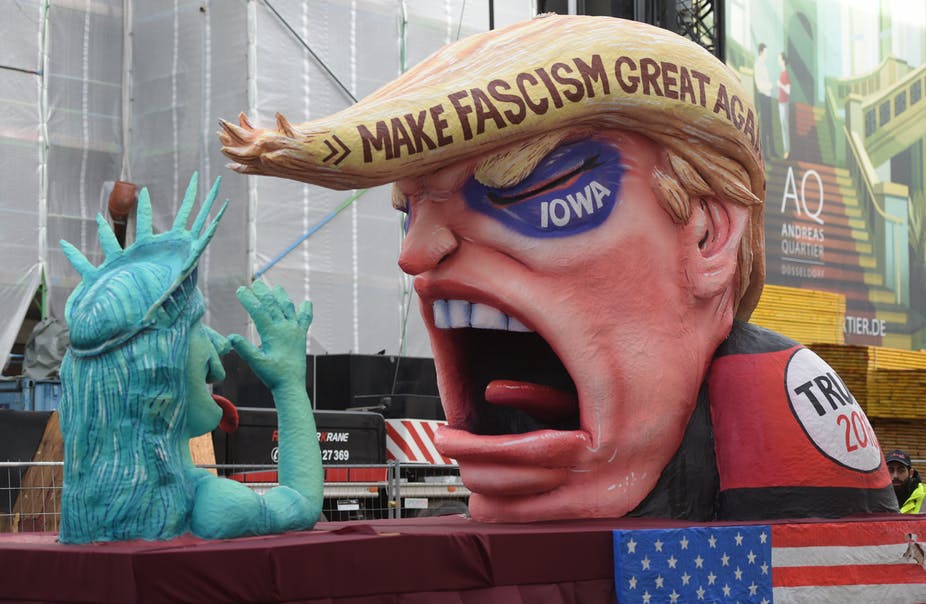 modern-day Mussolini rolled into town, they enthusiastically hopped on Trump’s Crazy Train with a one-way ticket and never looked back to wave goodbye to George Washington or blow a kiss to Thomas Jefferson. The only copies of the U.S. Constitution were in the passenger lavatories waiting to be unspooled.

If there was any remaining doubt about Donald Trump’s plans, they ended on September 23 when he was asked at a White House press conference about the peaceful transition of power after the election.

“We’re going to have to see what happens,” Trump responded. “You know that I’ve been complaining very strongly about the ballots, and the ballots are a disaster.”

“I understand that, but people are rioting,” responded the reporter, Brian Karem of Playboy magazine, who repeated the question. “Get rid of the ballots and you’ll have a very peaceful - there won’t be a transfer, frankly. There will be a continuation.”

That same day, Barton Gellman wrote a chilling article in The Atlantic, “The Election That Could Break America”, that laid out in hair-raising detail how Trump would likely cheat to win. It wasn’t just conjecture, with Gellman explaining that Trump’s GOP cronies and henchmen are already working feverishly to discredit voting by mail, create post-election chaos and lay the groundwork to steal the election between Nov. 3 and Inauguration Day. His unsettling conclusion was that Trump was prepared to drag the nation into the abyss to stay in power and the ultimate outcome of these malignant machinations were unclear.

With the expiration of the American experiment on the precipice, it boggles the mind how anyone could still support Trump. Yet, many of us face the daily horror of learning that friends and family members are not who we imagined them to be. They are still friendly, to be sure, but politically they are closeted fascists and November 3 is officially National Coming Out Day. After nearly four years of accumulated, indisputable evidence, we can no longer rationalize or make excuses for these folks.

They know Donald Trump’s demagogic personality and character flaws and they love him for it. They have seen his hectoring, bullying and wanton cruelty, yet oddly it brings smiles to their faces. They have watched the rampant corruption of his administration and they excuse it, even as they hypocritically yell, “drain the swamp.” They have heard the Woodward tapes, where Donald Trump knew of the severity of COVID-19, yet publicly downplayed it and mocked mask-wearing, leading to the deaths of 231,0000 Americans and counting. They have applauded the demolition of our cherished institutions and norms, while conspiratorially deriding government experts as “deep state” agents. They have clapped as Trump has humiliated the U.S. on the international stage, and served as Vladimir Putin’s gong farmer in Helsinki.

Their response to the desecration and dismantling of America has been to purchase red MAGA hats, put up campaign yard signs - for what may be our nation’s last real election - and pack arenas for Trump super-spreader events. So, they know full-well where the Trump Train is headed, and they are seemingly unbothered that the last stop at the end of the rail line leads to democracy’s graveyard.
We are no longer flirting with fascism; we have moved past the dating stage to the engagement, while surfing online for the honeymoon suite.

The moment has arrived for those of us who oppose Trumpism to consciously review our limited options if Trump tries to overthrow America: 1) Fight the tyranny, 2) Flee the country 3) Resign oneself to living under an authoritarian right wing dictatorship with Putin-style elections and gigantic statues of Dear Leader. (Yes, the wacky idea of placing Trump on Mt. Rushmore could reach fruition)

We no longer have the luxury of thinking, “things will work out in America, simply because this is America.” Blind optimism is the enemy and it’s a fatal mistake to continue brushing off Trump as a clownish, toilet tweeting troll who is simply trying to throw red meat at his base to win the election. The president has proven to be a humorless tyrant, and those who still think he’s joking will end up as his punchline or punching bag.

As a kid, I watched the old black and white war films. I’d see the funny dictator with the little mustache ranting on-stage and wonder, “How could Germany fall for that?” Or, Mussolini with his puffed out chest, covered in medals, and wonder, “Why couldn’t people see through such a fool?”

We now have our answer.

The years marched on and I felt incredible gratitude that I would most likely avoid serving in a horrific overseas battle or a bloody civil war. My generation, or so it seemed, was one of the lucky ones that could enjoy our freedom while sipping coffee in outdoor cafes, rather than engaged in a ruthless, existential fight for liberty.

If Donald Trump gets his way, we may tragically end up, after all, starring in one of those hideous films. Future generations will watch the comical, orange fat man and wonder, “How was it that millions of Americans were in thrall with this fascist buffoon?”

The hard truth is that even in the most powerful democracy in world history, a stunning number of people prefer surrendering their civil liberties and living in a dictatorship. I’ll never understand it, but we have arrived at history’s hinge, with the outcome depending on the decisions we make and the actions we take. Are you ready?