Having lost credibility in several countries, conservative Evangelicals are now pushing their discredited and widely ridiculed “ex-gay” rhetoric in Latin America. In doing so, evangelicals risk embarrassing themselves in Central and South America, much as they have in the United States, the United Kingdom, and Australia. In these countries, most of the so-called ex-gay groups collapsed after failing to successfully convert people from gay to straight. Additionally, most of their leaders eventually came out of the closet or were caught in gay scandals, highlighting their hypocrisy.

The latest assault on reality came from “ex-homosexual” Christopher Yuan, an evangelical teacher with Moody Bible College and author of the book “Holy Sexuality and the Gospel: Sex, Desire, and Relationships Shaped by God’s Grand Story.” (The  book is full of shallow bumper-sticker slogans such as, “And even though people might say, “Well, I’m born this way, I’m born that way,” well.. “You must be born again.”)

In a Brazilian publication, Yuan shamelessly defames the LGBT community, yet doesn’t have the courage to own his hate of openly gay people, no less address his internalized homophobia. Instead, he disingenuously wraps his contempt for those who live with more integrity and honesty than he does, with a thin, translucent veneer of “love.”

“God loves us. When we talk about people in the gay community as our enemies we forget that they are still bearers of being the image of God,” Yuan unconvincingly says to cover himself against criticism.”

Yet, Yuan can barely conceal his real feelings: “We need to understand that this person (a homosexual) is not completely evil,” he says. “There are some people who are like that, but I would say most are not.”

Such transparently sophistic phrasing is reminiscent of Donald Trump’s announcement that he was running for president. Trump was widely criticized when he compared Mexicans to criminals and rapists, but tried to make his disdain palatable by throwing in, “And some, I assume, are good people.” By implying that an LGBT person’s sexual orientation is part of their “evil” side, Yuan is projecting his own self-hatred, grossly distorting the Bible and causing harm to LGBT people who will certainly suffer discrimination from his destructive preaching.

Yuan explains that due to the misconception of acceptance the very idea of “love” has been distorted. “It is this complete distortion of what is good and what is love that today, the mantra of the gay community is ‘love is love’. Apparently it seems obvious that ‘love is love’, but I would argue that not all love is in fact love…The woman who is beaten says she still loves her husband. Even a father who sexually abuses his little daughter would argue that he loves her. I do not think we can say that ‘love is love’ in the sense that all love is the same.”

Perhaps, Yuan believes that if he debases the genuine romantic love experienced by out and proud gay people, he can rationalize the feelings of profound loneliness and emptiness he surely must feel when he sees happy LGBT couples. On some level, the agonizing incongruity of what he feels on the inside and what he presents to the outside world, must drive him to distraction and lead Yuan to emit dehumanizing rhetoric to help manage the 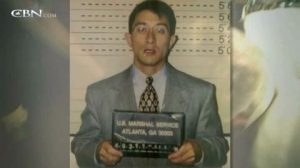 frustration and pain he has foisted upon himself though abusive self-denial.

Yuan also deliberately conflates his time as a drug abuser and dealer with his homosexuality, as if heterosexuals don’t also abuse or deal drugs. Clearly, his previously out-of-control lifestyle had nothing to do with his sexual orientation and everything to do with his own, deep personal moral failings – the same odious character flaws he brings today to his dishonest campaign to slander LGBT people.

Yuan’s tiresome oratory tricks are old hat. In 1998, U.S. evangelicals trotted out allegedly “ex-gay” Michael Johnston, who founded National Coming Out of Homosexuality Day. Like Yuan, he was HIV-positive and abused drugs, blaming both on his homosexuality. Unfortunately for Johnston, he was discovered by Truth Wins Out and attorney Michael Hamar to be a charlatan that still hooked up with men, even as he was publicly declaring that Jesus had miraculously healed him of his homosexuality.

This politically motivated penchant for claiming to be “ex-gay”, then proving to be a hypocrite, is a pitiable occurrence we have witnessed over and over again. So, forgive those of us who role our eyes at Yuan’s predictable and canned testimony – for we’ve heard it all before and that is why “ex-gays” have zero credibility in the United States. (Here is a television commercial from 1998 promoting Johnston’s “ex-homosexual” lie.)

Finally, for Yuan to preach such divisive drivel is reckless and irresponsible considering Brazil just elected Jair Bolsonaro, a fascist with aggressively anti-gay views. In a 2011 interview with Playboy magazine Bolsonaro said, “I wouldn’t be able to love a gay son. I wouldn’t be a hypocrite, I’d prefer a son to die in an accident than appear with a moustacho.”

Yuan appears clueless to the danger posed by his hateful rhetoric, given the precarious new political order in Brazil. It is reminiscent of when North American Evangelicals spewed “ex-gay” rhetoric in Uganda, nearly leading to a law that sought to jail and murder that nation’s homosexuals. Led by North American hate preacher Scott Lively and now-defunct Exodus International, the careless preaching led to the persecution of Ugandan sexual minorities, who had to hide their identity, lest they be targeted for violence.

It is profoundly disrespectful for North American evangelicals to export their failed “ex-gay” programs. These ideologues know from experience that “pray away the gay” programs don’t work and harm people, yet they still keep peddling their poison. I strongly urge people living in Latin America to do your homework and study what happened in the United States, Australia and the United Kingdom. “Ex-gay” programs will not work any better in Latin America than they did in other countries. These groups mostly closed down here due to lack of success, while leaving behind a tragic trail of psychologically scarred victims. Please, don’t repeat our mistakes.