The battles in Arkansas and Indiana over two bogus “religious freedom” bills, that were thinly disguised vehicles for anti-LGBT

discrimination, exposed a major rift within the Republican Party. It came down to Big Bible vs. Big Business – and the concerns of social conservatives were swiftly dropped like a bad stock. (* “Big Bible” does not mean ALL Christians. Just the intolerant ones who reject separation of church and state and have shamelessly built a lucrative industry distorting the Bible to justify discrimination)

With major corporations like Wal-Mart and Apple loudly condemning these bills, Republican lawmakers quickly retreated. Amended bills were passed that explicitly banned these controversial Religious Freedom Restoration Acts from being used to discriminate based on sexual orientation. This, of course, undermined their original purpose, which was to allow business owners to cite their faith to deny services to LGBT people. (and anyone else they morally objected to)

If this weren’t already a crushing defeat, Georgia Voice reported today that conservative Republican Gov. Nathan Deal endorsed a “religious freedom bill for Georgia with an explicit anti-discrimination clause. This is a game changing loss for “Big Bible,” which had made these vindictive bills the centerpiece of their post-gay marriage strategy. The idea was that if gay marriage was legal, fundamentalist Christians could cite their faith to opt out of laws everyone else had to follow.

Incensed about their misfortune, the extremists attacked the Fortune 500. The most outlandish assault came from Texas Sen. Ted Cruz who said, “The Fortune 500 is running shamelessly to endorse the radical gay marriage agenda over religious liberty.”

Right wing “talking head case” Glenn Beck, went so far as say that Christians might end up in concentration camps. A prediction that may come true if a Christian plans to pitch a tent in Yellowstone Park and concentrate while roasting marshmallows by a campfire.

What neighborhood grocery stores? With the help of Perkins, Wal-Mart put these mom and pop shops out of business long ago. The only ones that remain are liberal Granola Marts in big cities. And I can’t imagine Tony Perkins slithering down the aisles, his little cart maneuvering around hippies, looking for organic tofu.

It’s poetic justice that businessmen are now bouncing social conservatives, who were duped into providing Republicans the votes to install the corporate worshipping Robert’s Court. These rubes bought the insincere rhetoric – from “job creators” to “no taxes” – and now they are throwing tantrums because corporate America has too much power. It did not take a genius to figure out that enabling an entity where profit reigned supreme would backfire in a rapidly changing age where anti-LGBT bigotry no longer pays.

Social conservatives also have a hypocrisy problem. On one hand they are proposing that government step in and pass laws to protect fundamentalist Christians from gays who want to buy wedding cakes. But on the other hand, they are saying that government protections against discrimination are not the solution for LGBT people. In the immortal words of Indiana’s disgraced Gov. Mike Pence: The gays can rely not on laws, but “Hoosier Hospitality.” (Yeah, he actually said that)

The sad fact is that 29 states don’t have laws to protect LGBT people from discrimination. Gay marriage is legalized in 37 states. This 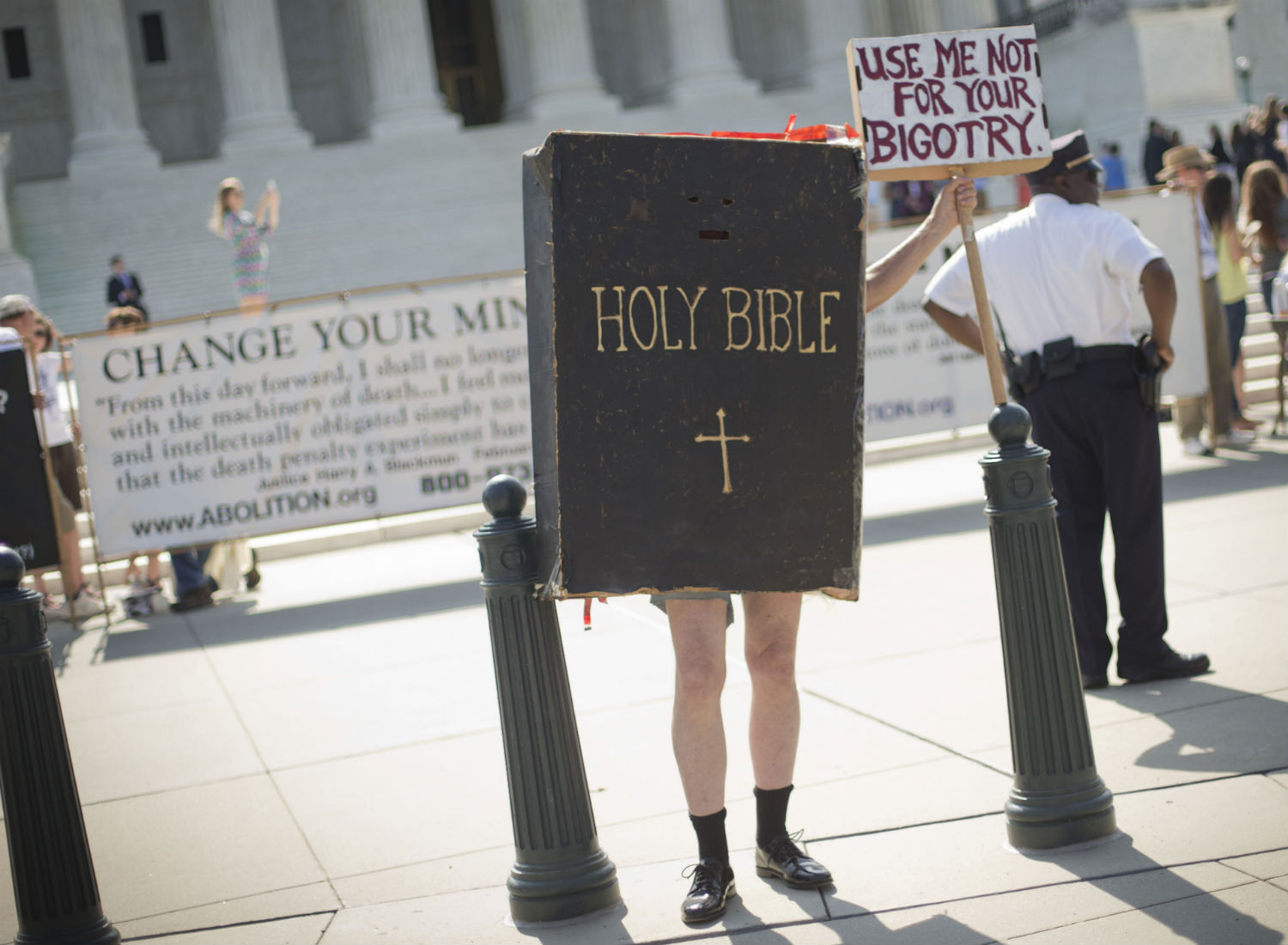 means that in many places a gay person can marry his or her partner, but get canned for placing a wedding photo on the office desk.

Another lie peddled by Big Bible is that gays are forcing Christian business owners to “participate” in their weddings. This is not true.

Unless one is invited to a wedding as a guest or directly involved in the actual ceremony, one is not a participant. These business owners are mere vendors who falsely portray themselves as participants so they can justify sticking their nose where it doesn’t belong and expressing moral disapproval.

A florist or baker providing a product for a gay wedding is no more participating in that event than a hotdog vendor at Wrigley Field is playing in the game. A gay hotel clerk registering bigots at the Omni Shoreham hotel for the Values Voter Summit is not “participating” in that noxious event. He or she is simply doing his or her job.

The Human Right’s Campaign’s Chad Griffin summed it up:

“This historic week made one thing clear. There is a new American coalition for equality emerging. It crosses party lines. It touches all sectors of society – from businesses to faith leaders, to elected officials. It is fundamentally reshaping our national politics. And no state legislator peddling a two-bit piece of bigoted legislation is going to fly in our country anymore.”

Big Bible better start to pray – because its days are numbered where it can prey on LGBT people without consequences.