Indiana: A Funeral for the Anti-Gay Movement

It was supposed to be a week of triumph for Indiana. Instead it ended in catastrophe.

While the eyes of the world were on Indianapolis for the NCAA Final Four basketball tournament, Republican Gov. Mike Pence signed an odious law that arguably gives religious business owners the right to turn away LGBT customers.

The negative reaction from corporate America was swift and decisive. It showed that while backwaters still exist where anti-gay bigotry plays, it certainly no longer pays. Apple CEO Tim Cook penned an op-ed in The Washington Post that called the new law “dangerous.” Indiana-based Angie’s List stopped a $40 million expansion. The company was one of nine major Indiana corporations that wrote a letter in staunch opposition to the law.

“The legislation in Indiana – and there are some bills being considered in other states – is not just pure idiocy from a business perspective – and it is that – the notion that you can tell businessmen somehow that they are free to discriminate against people based on who they are is madness.”

If this weren’t enough, the governors of Connecticut, Washington, and New York banned all non-essential travel using state funds to Indiana; and cities such as San Francisco, San Diego, Seattle, and the District of Columbia did the same.

“We’ve received more than 600 emails and calls from visitors across the country who’ve let us know they are canceling their trip to Indy because of this law,” said Chris Gahl of Visit Indy, which promotes the city’s tourism. “Then, on top of that, 10 conventions have called with concerns over the bill, including one, a women’s group with 800 people scheduled to come here, backing out.”

The NCAA spoke out, as well as the NBA’s Indiana Pacers, and even NASCAR, which said in a pointed statement:

“NASCAR is disappointed by the recent legislation passed in Indiana. We will not embrace nor participate in exclusion or intolerance.” 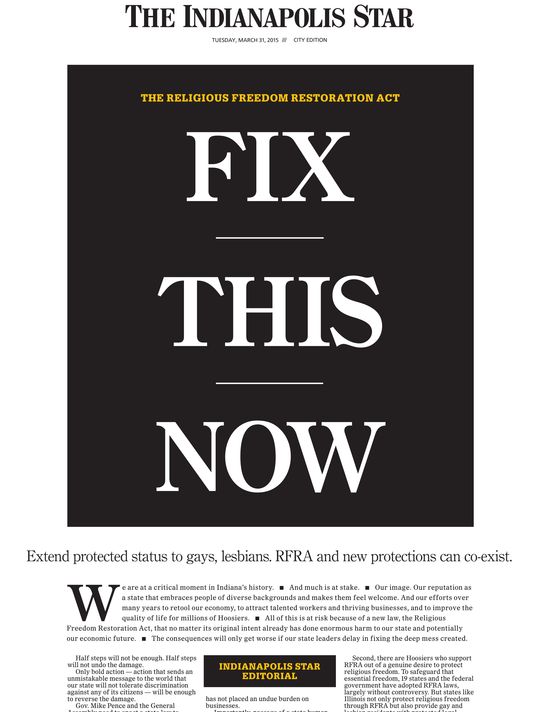 “The Religious Freedom Restoration Act turned Indiana and Indianapolis into a laughingstock, reduced us in the national view to a bunch of intolerant rubes.”

Alarmed by the fallout, the state’s largest newspaper The Indianapolis Star ran a huge front page headline: “Fix This Now.”

Gov. Mike Pence’s PR efforts to undo the damage boomeranged. In one of the worst interview appearances in recent memory, he came across as defiant and evasive on ABC’s This Week with George Stephanopoulos.

Pence tried the old right wing standard of blaming the media: “Some of the media coverage of this has been shameless and reckless and the online attacks against the people of our state, I’m not going to stand for it,” he said.

Host George Stephanopoulos pointed out that Advance America, a key supporter of the law, wrote on its website: “Christian bakers, florists, and photographers, should not be punished for refusing to participate in a homosexual marriage!”

Stephanopoulos asked: “So, this is a yes or no question. Is Advance America right when they say a florist in Indiana can now refuse to serve a gay couple without fear of punishment.”

Pence looked lost and repeatedly failed to answer this question, instead choosing to change the subject. Stephanopoulos probed further asking: “One fix that people are talking about is adding sexual orientation as a protected class under the state’s civil rights laws. Will you push for that?”

Pence went on to offer disingenuous platitudes such as, “Hoosiers don’t believe in discrimination.” Clearly, the governor saw no irony or hypocrisy in signing a law where religious fundamentalists received special, extra-constitutional legal protections, yet LGBT citizens were left to depend on what “Dense Pence” called “Hoosier hospitality.”

Pence thinks he is a brave martyr who is digging in, but it’s more like he’s digging a grave for the state’s reputation. But Pence doesn’t care because he is an unabashed extremist who was once on the board of the Indiana Family Institute, the state’s largest anti-gay organization. For Pence, gay bashing isn’t a peripheral issue, is central to his philosophy. His 2000 Congressional campaign website said:

“Congress should oppose any effort to recognize homosexuals as a ‘discreet and insular minority’ entitled to the protection of anti-discrimination laws similar to those extended to other ethnic minorities.”

“There were only two ways to make this right: Either repeal the fool law or make the LGBT community a protected class. Pence isn’t doing either.”

Pence spent his entire career proudly wearing bigotry on his sleeve. So people aren’t buying it now when he dresses up his intolerance as a deep concern for religious liberty. His actions have backfired and based on the public outcry, this fight in Indiana will be remembered as a funeral for the anti-gay movement. They are just fools who aren’t fooling anyone.