In the most anticipated hockey game of the Olympics, the United States defeated the totalitarian police state of Russia on their home turf of Sochi, as the dictator Vladimir V. Putin pouted in the stands.  T. J. Oshie scored 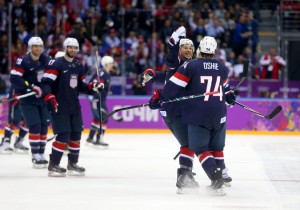 four times in the overtime shootout to give the United States a 3-2 victory, humiliating Russia in a sport the nation is well-known for. The embarrassing loss in the group stage of the tournament did not eliminate the Russians; it simply means they might have to play a qualification game to reach the quarterfinals.

Hopefully, they will meet the Americans in the finals, so we can whip their bigoted, backward asses one final time. Of course, we might be in for trouble if Dear Leader Putin rides shirtless on horseback into the rink with a hockey stick. Or, maybe he will simply have his thugs slip polonium-210 into the water bottles of the American hockey players. I wouldn’t put anything past this evil hooligan.