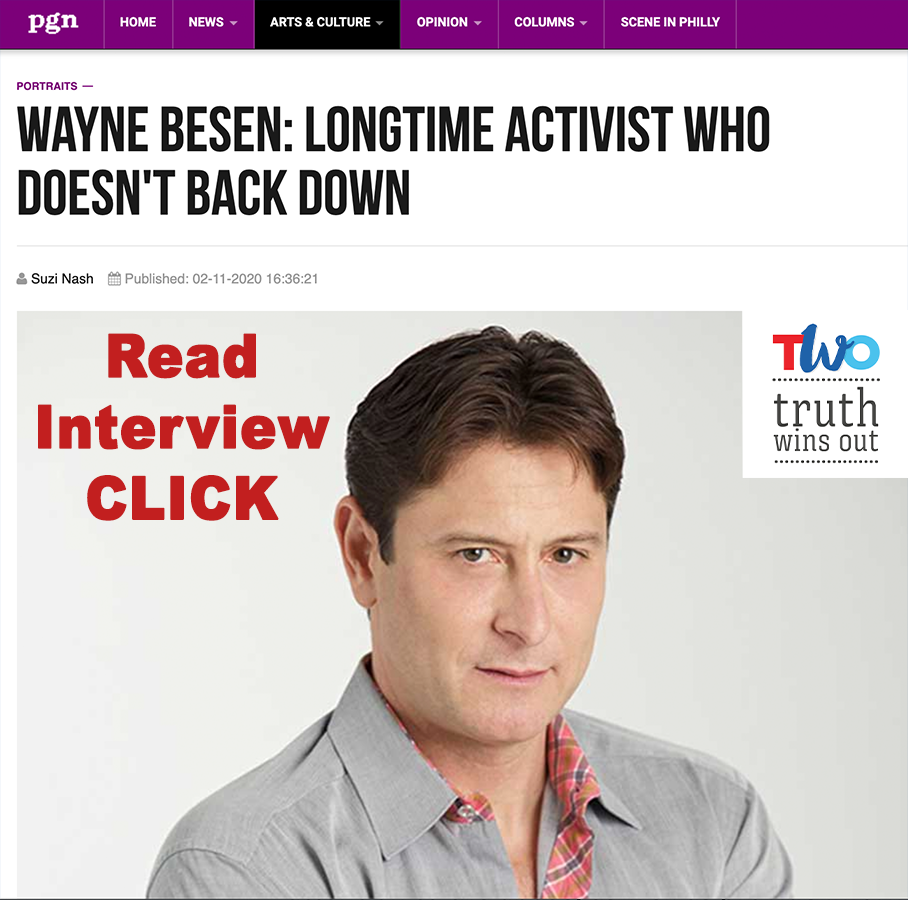 I think we were lulled into complacency. Many young kids don’t feel the necessity for gay bars or community centers because they are fairly comfortable being out in a straight environment, and they don’t feel as many threats.

I think it’s even greater than that. I think the movement is on hold until we deal with the fascism that is taking hold all over the world. Because the laws we pass protecting us are only effective if there is the rule of law. If we lose our democracy and don’t have the rule of law or a constitution, then we are at the whim of a dictator and our opponents. One thing I know, in every fascist or right-wing movement, they start out not being completely anti-gay, even Trump held up a rainbow flag, albeit backward. Still, even when they start out seeming to be our friends, they can’t be, and the reason for that is that they all depend on legitimacy from the church, whether it’s Putin or Trump, they make a deal with the church, “I’ll hand over the social policy to you as long as you legitimize me.” That is how every right-wing government maintains itself. They pay off the church with power in order to stay in power themselves. And we are the victims along with other minority groups. If we lose our democracy, and we may have already done so since, as of this month, we now have an unaccountable king who can cheat in the next election. If he can, he will subvert with help from a foreign government, purging voter rolls and 1,000 other methods. And if he loses, he will claim it was rigged, and he has the attorney general on his side. And it’s going to affect the whole world. Right now, in Europe, the fascists are gaining power left and right. Putin is bankrolling these oligarchs to get them in power. So our rights must be second to defeating right-wing fascism. If we don’t, every gain we’ve had in the past 20 years could evaporate. It’s only a short time before social acceptance begins to disappear, because people who are scared, as we have seen with the Republicans recently, do things they wouldn’t have done before, like cheering on dictators like Kim Jong-un. Next, they will take over the schools and start teaching a religious agenda, and in just a few school years, society will change, and people will go back in the closet if they are afraid of losing their homes or jobs.

And a lot of folks have families with kids now who can’t afford to be unemployed.

Yes, we’re really at a precipice right now. Hopefully, we’ll get through this period, and things will be OK, but we may not. And we’ll be looking back at the recent past as an extraordinary time of freedom and mourn it. We need to get rid of this tyrant and his cronies. It’s not even about the political parties. The fact that they would allow him to extort a foreign government to do a fake investigation against a private citizen to cheat an election and you let that happen, and then allow him to purge anyone who spoke against him gives me chills. Seeing them obstreperously cheer every time he uttered a breath at the State of the Union — it wasn’t normal behavior. We have nine months to save this country. If not, Trump will give them whatever they want. Forget conversion therapy; we won’t have the basic freedom to rent homes or buy cakes. They’ll have a pass to discriminate. We are under surveillance all the time, and the justice department can do whatever they want. Right now, we have freedom of speech and the right to protest and peacefully assemble. Once they take those away, there’s nothing left. I’m not trying to scare people but just saying we need to be very focused on what’s going on or all that we’ve worked for could be taken away. The LGBT community needs to be the tip of the spear because we have everything to lose.

What are some traits that you got from your parents?

I have a good balance. My mom’s a fighter, but my dad has the calm head, so whenever I’m in a situation, right before I do anything stupid, I try to channel my dad and take a moment to breathe. They were also both voracious readers, and I read every day.

What was the worst interview you’ve done?

I was in Florida, and there was a hurricane coming, and I was arguing with Dennis Prager, and I wanted the interview over so that I could get out. I can’t stand him anyway, and we shouted so much that they canceled the interview. The other one was similar. The limo driver got lost, and we barely made it to showtime. Dr. Joseph Nicolosi, the king of reparative therapy, was there. I saw his face, and I was so disgusted that I called him a quack. He said, “I’m not a quack! How dare you! You can’t call me a quack!” and I started quacking at him. I think we were on Hannity and Colmes or maybe it was O’Reilly. It was ridiculous. He deserved it, but it was not my best day. I got back to the HRC office in D.C., and my boss was looking at the transcript and said, “Did you actually quack at him?” And I said, “I’m sorry, sir, but yes, I think I quaked a little.” [Laughing] Not my finest moment!