A hotshot Washington lobbyist, Jack Burkman, trashed his career this week, after he announced he’d fight for a bill to ban gay men from playing in the National Football League. He told TIME magazine: 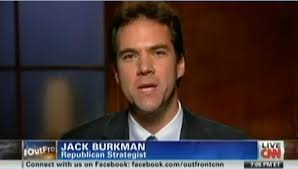 “I have always done what I think is right for the country,” he tells TIME. “This is not about any form of discrimination. It is not about putting a straight man ahead of a gay man or a gay man ahead of a straight man. It is about re-enforcing and protecting American values of decency and civility. Should NFL players shower with NFL cheerleaders? Certainly not. Given this, why should straight NFL players shower with gay NFL players?”

“Having your head up your ass seems quite gay to me. No?”

His clients weren’t particularly thrilled either, since his gay obsession is a distraction from his day job:

DC Solar Solution, a California company that paid him $30,000 in the fourth quarter of 2013, told TIME Tuesday it was severing ties. “DC solar does not condone or support Mr. Burkman’s homophobic views, and since learning about his misguided efforts to write legislation banning gay athletes from the NFL, we have ended our relationship with him,” wrote DC Solar executives Jeffery Carpoff and Paulette Carpoff in a statement. “DC Solar values diversity within our company and within out communities, and we do not tolerate discrimination of any sort. As a company working to address issues about our country’s future, we have no intention of working with those stuck in the past.”

Here are a few suggested names for his unconstitutional monstrosity of a bill:

“You can’t kick if you suck dick.”

I hope I haven’t offended anyone with my off-color suggestions, but it is cold outside and I’m feeling bawdy today.