History has been made!! Jason Collins will be the first openly gay male athlete to play for a major team sport. According to BuzzFeed: 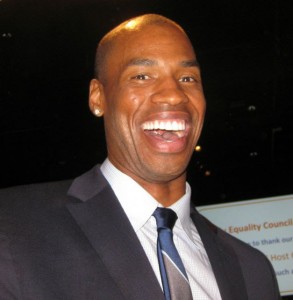 The Brooklyn Nets announced Sunday that they have signed Jason Collins, making the free-agent center the first openly gay athlete playing in one of the four major North American sports leagues.

“The decision to sign Jason was a basketball decision,” said Nets general manager Billy King said in a written statement. “We needed to increase our depth inside, and with his experience and size, we felt he was the right choice for a 10-day contract.”

Collins will be on a 10-day contract with the Nets and be in uniform for tonight’s game against the Los Angeles Lakers.

As a huge NBA fan and a former player, I am ecstatic about this awesome development. A massive barrier has fallen today. Even cooler is the fact he was signed by Russian billionaire Mikhail Prokhorov, giving a huge public relations boost to the image of Russians (along with the women of Pussy Riot). In terms of Jason Collins, I just love this guy. He represents everything right about sports and the LGBT community. He is a class act and deserved his big chance to make history. [Video from Joe My God]