The Camel Conundrum and Why Fundies Hate Science

Religious fundamentalism is a backward lifestyle that is harmful to society. It stifles innovation, retards progress, and forces modern people to live in a fictional past. Case in 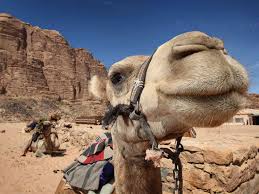 point is a devastating story in yesterday’s New York Times, which shows how the Bible is an unreliable historical document written with a remarkable degree of literary license:

There are too many camels in the Bible, out of time and out of place.

Camels probably had little or no role in the lives of such early Jewish patriarchs as Abraham, Jacob and Joseph, who lived in the first half of the second millennium B.C., and yet stories about them mention these domesticated pack animals more than 20 times. Genesis 24, for example, tells of Abraham’s servant going by camel on a mission to find a wife for Isaac.

These anachronisms are telling evidence that the Bible was written or edited long after the events it narrates and is not always reliable as verifiable history. These camel stories “do not encapsulate memories from the second millennium,” said Noam Mizrahi, an Israeli biblical scholar, “but should be viewed as back-projections from a much later period.”

Dr. Mizrahi likened the practice to a historical account of medieval events that veers off to a description of “how people in the Middle Ages used semitrailers in order to transport goods from one European kingdom to another.”

Clearly, anyone who still subscribes to the false notion of biblical literalism and inerrancy has their heads buried in sand that was not trampled upon by actual camels. Here is how we learned the Bible screwed up an important detail:

For two archaeologists at Tel Aviv University, the anachronisms were motivation to dig for camel bones at an ancient copper smelting camp in the Aravah Valley in Israel and in Wadi Finan in Jordan. They sought evidence of when domesticated camels were first introduced into the land of Israel and the surrounding region.

The archaeologists, Erez Ben-Yosef and Lidar Sapir-Hen, used radiocarbon dating to pinpoint the earliest known domesticated camels in Israel to the last third of the 10th century B.C. — centuries after the patriarchs lived and decades after the kingdom of David, according to the Bible. Some bones in deeper sediments, they said, probably belonged to wild camels that people hunted for their meat. Dr. Sapir-Hen could identify a domesticated animal by signs in leg bones that it had carried heavy loads.

The findings were published recently in the journal Tel Aviv and in a news release from Tel Aviv University.

Folks, this story is a perfect example of why conservative fundies hate science and often work to defund public education. They simply can’t thrive in a world with smart people who see through their fables, so they fight to hijack public policy.  Their nefarious goal is to indoctrinate children and remake the world full of credulous fools. It is also why fundies turn to crackpot pseudo historians, like David Barton, to rewrite history and create fake facts that support their incoherent narrative.

My words are not an indictment of all religion. People can learn from not-hateful versions of modern faith that teach allegorical lessons — rather than mind-numbing rote memorization of passages that are supposedly dictated by God — when science proves this is not true.

Next time some ignoramus thumps the Bible and points to a passage that supposedly condemns homosexuality, open Genesis and point to any reference of a camel. That ought to stop the conversation and end the argument.