The noble march to end the “ex-gay” myth continues, this time in the southern part of the nation. On Monday, HB 1135 was introduced in the General Assembly by its sponsor, 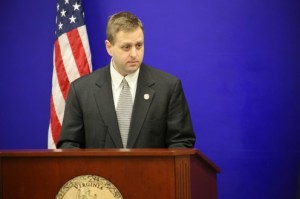 Delegate Patrick Hope. He presented two survivors of the psychological terrorism, as well as community and faith organizers who have urged the state to ban this unethical and damaging “treatment” for minors.

According to GayRVA.com, Del. Hope shared reasons for banning “gay therapy” on children.

“There is no on and off switch for sexual orientation, and within the medical community, there is… alarming evidence that [sexual conversion therapy] is psychologically harmful,” said Hope. “We, in this very session, could regulate tanning beds for minors. This is far worse… than what a tanning bed does… Just think about the psychological impact of what this therapy does. At the very minimum, we need to protect our children.”

Rev. Robert Coats went through voluntary conversion therapy for three years in the early 1980s. After expressing his concern about not “magically becoming straight” to the facilitators of the program, Rev. Coats recalls being told, “no one really ever becomes straight, you just learn how not to act on your innate feelings and emotions.”

“I am honored to stand here and support this bill, because it is a bill of justice,” said Rev. Coats. “It gives a voice to people who cannot speak for themselves.”

Apryl Prentiss, an English professor at a local college and a contributor to GayRVA, also shared her experience with voluntary ex-gay therapy.

“This bill is aimed at protecting those who are in a much more vulnerable state than I was emotionally, physically and developmentally. Minors who are forced to undergo conversion therapy are being forced into a type of treatment that has been rejected as unsafe and unhealthy by virtually every respected mental health entity,” said Prentiss. “And they are being forced to do it at an absolutely crucial time of their lives.”

Truth Wins Out applauds Delegate Patrick Hope, Rev. Robert Coats, Apryl Prentiss  and everyone in Virginia who is courageously speaking out against the barbarism of “ex-gay” therapy. As the bill advances, we stand with these brave heroes who are moving mountains to protect LGBT youth against the mental scars caused by anti-gay pseudo-therapists.

The “ex-gay” industry must be worried now that this effort has moved into the south. Virginia is the home of “ex-gay” activist groups Parents and Friends of Ex-Gays (PFOX) and Christopher Doyle’s outfit, Voice of the Voiceless. It is also the home of Regeneration ministries, which was an Exodus International affiliate, before Exodus closed down. If a law banning “ex-gay” therapy for minors passed in Virginia, it would be a dagger straight through the heart of America’s “ex-gay” industry.

California and New Jersey already have such bans in place. Similar bills have been introduced in Pennsylvania, Maryland, Ohio, Massachusetts, New York, and Minnesota.