Ex-Gay Activist Jeff Winter Misinforms On The Causes Of Homosexuality

Rev. Jeff Winter is chairman of One By One, a Presbyterian-affiliated “ex-gay” outfit that peddles junk science to convince Americans that people are not born gay. He is selling his hateful and discredited snake oil at The First Presbyterian Church in Haines City, FL, where he will be a featured speaker on Saturday. According to the program:

A description Winter provided says Grammer will speak about “how relational trauma of any form can lay a foundation for a person’s struggle with same-sex attraction.” A biography says Grammer, a pastor at Redeemer Presbyterian Church in Indianapolis, had been attracted to males since age 6 but is now married with two sons.

Winter said the media give the false impression that homosexuality is a fixed trait some people are born with.

“I have seen over the years numerous people leave homosexuality, and I just wanted the church people here and anyone else who wants to come to see that homosexuality is not innate and that people who have same-sex attractions can change, and they don’t hear that message in the media,” he said.

Well, people can say they have changed. But the evidence is not so good that the alleged change sticks. It is usually a matter of time before such individuals come back out of the closet.

I can’t say emphatically enough that abuse, trauma or family structure has ZERO to do with a person becoming gay. LGBT people come from every imaginable background and family type. This is why we see people as politically and philosophically diverse as Barbra Streisand and Phyllis Schlafly having gay sons. It is why we see people as different as Dick Cheney and  Dick Gephardt having lesbians daughters. The simplistic cause and effect model presented by the speakers on Saturday is a fairy tale that has no basis in reality.

There is simply no modern, credible science to back the reverend’s irresponsible and wild assertions. On what basis does he make the outrageously false claim that some form of neglect or hardship is the cause of homosexuality, when there is so much evidence to the contrary? Does he have peer review studies (that don’t date back forty years) to support his discredited thesis?

The truth is, there is simply no contemporary, peer review science to back the claims of the “ex-gay” mini-celebrities who will deliberately mislead people on Saturday.

Personally speaking, I grew up in a wonderful home and had an idyllic childhood (see pic on right). I am close to my mother 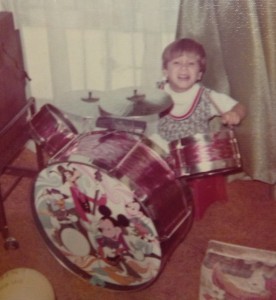 and father who have been married for more that forty years. The only trauma I endured was coming out in a homophobic world and having to rebut lies disseminated by charlatans like Rev. Winter. It was damaging to me to have to continuously explain that my sexual orientation was normal and natural and that nothing “went wrong” to make me gay.

It is also tragic that Brad Grammer exploits his marriage by wrongly using it as an example of success. What he doesn’t say is that anyone can walk down an aisle and wed another person — even if such “ex-gay” marriages offer a lot more worse than better, often ending in a bitter divorce. Marriage is tough enough without the handicap of having one spouse who is gay and not sexually attracted to his partner. That Grammer would suggest using the opposite sex as a cover for his charade is unconscionable. Such arrangements have caused untold misery and even led to groups that offer support for the victims of these marriages, such as the Straight Spouse Network.

Those who are speaking at this “ex-gay” dog and pony show don’t represent biblical truth, like they claim. There are so many people of faith who adamantly disagree with their destructive message. Bigotry and the bible don’t necessarily have to go hand-in-hand.

Thankfully, we have largely debunked the “ex-gay” myth and overcome such propaganda through hard work, activism, and education. However, we must be diligent because dead-enders like Winter, who are holdouts  from Exodus International’s demise, continue to tell lies about our lives. His seminar in Haines City will help not one person become straight, but it may cause some parents to force their children into quack therapy or pressure them to try to pray away the gay. A few unlucky gay teens in the audience may become depressed or contemplate suicide.

According to a study published in the Journal of the American Academy of Pediatrics, LGBT teens who experienced negative feedback from their family were 8 times more likely to have attempted suicide, 6 times as vulnerable to severe depression, and 3 times more likely to use drugs (Caitlin Ryan, San Francisco State University, June 2009).

All major medical and mental health associations, including the American Medical Association, American Psychological Association and the American Psychiatric Association, have stated that reparative therapy is ineffective at best, and can be extremely harmful to clients, especially impressionable minors who do not yet have the agency to make informed choices on therapy and are often subjected to reparative therapy by well-meaning parents who aren’t aware of the dangers of the discredited treatment.

How does Rev. Winter look at himself in the mirror each morning when he knows deep in his heart that he is a closeted gay man selling a fake “cure” that doesn’t work and causes a great deal of harm?