While I was at the marriage equality rally in front of the United States Supreme Court today, the homophobes marched towards us with a band playing their stale and predictable patriotic songs. (As if hate is an American virtue) Then, they mixed in with the LGBT advocates — with absolutely no barrier between the two sides. I wasn’t sure if this was democracy or a demolition derby.

You know, I’ve been at many events where there have been gay and anti-gay activists, but today was an unprecedented — if not risky — mix of the two sides. Fortunately, violence did not break out, although it easily could have. Instead, the two sides traded verbal barbs and hurled competing Bible verses.

While milling about and watching the verbal scrums, I discovered the world’s most spectacular anti-gay bigot — a Bubba on steroids!!! I was so excited, I mean, Universal Studios couldn’t have cast a better hateful hick to represent our opponents.

Well, I’ve said enough — take a look for yourself!

Take a look at this guy, folks. He is the reason why the latest ABC poll showed that 80% of voters under 30 support gay marriage. They see a Bible toting bigot like this and ask, “Do I want to be like this?” And then they hurry off to their school’s Gay-Straight Alliance to become an ally. 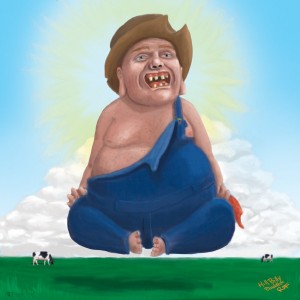