In news from across the pond, the High Court ruled that it was legal for the Transport for London to ban a bigoted so-called “ex-gay” ad from bus boards that was intended to demean the existence of LGBT people.

The homophobic group, Core Issues Trust, reacted to a pro-gay ad from the group Stonewall that read, “Some People Are Gay, Get Over It,” by proposing a counter ad where the bus posters read, “Not Gay! Ex-Gay, Post-Gay and Proud. Get over it!”

Of course, as we all know, there are no such thing as “ex-gays” and the term is a cruel hoax meant to cause harm. It is a slippery political creation to stigmatize LGBT people, impart shame and guilt, and deny a minority population equal rights under the law.

Apparently, the court agreed, justifying the ad ban by ruling that it would “cause grave offence” to those who were gay and was perceived as homophobic, “thus increasing the risk of prejudice and homophobic attacks”, according to the judge.

The BBC reports that the TfL refused to carry the Core Issues Trust advert on the grounds it was “likely to cause widespread or serious offence to members of the public”, and it contained “images or messages which relate to matters of public controversy and sensitivity.” 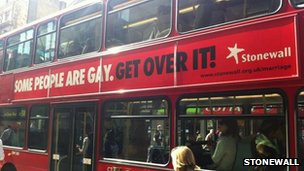 TfL’s lawyers argued Article 10 did not entitle the trust to advertise “offensive material”. They said the ban was justified by the need to protect public morals and the right of homosexuals under Article 8 of the convention to respect for their dignity and private lives.

The judge revealed her concern over the issues raised by the case by giving Core Issues permission to appeal to the Court of Appeal.

No doubt, the professional martyrs on the Christian Right in America will mount their high horse and scream bloody murder, claiming their free speech rights are in grave danger. However, they conveniently forget that in this country we have the First Amendment, which protects offensive and often false speech. (Although, there are legitimate concerns with many “ex-gay” marketing schemes, that the purveyors are engaged in deliberate deception and consumer fraud by grossly misrepresenting the success of their failed products.)

While I would not advocate banning such ads in the United States, the court was certainly correct to point out the potential for hate and bigotry that could be spawned by such misleading and mean-spirited speech. To quote Stonewall spokesperson Ben Summerskill:

“In a city where over half of gay young people face bullying at school, and where tens of thousands of gay people are subjected to hate crimes every year just because of the way they were born, it’s perfectly proper for a mayor to object to the use of such advertising in an iconic public setting.”

Again, I’m not a fan of prohibiting speech, but no reasonable person could say that the “ex-gay” ad would produce anything but animus and hostility towards LGBT people.