Atlanta ex-gay activist D.L. Foster has a history of racially insensitive commentary, as well as affiliation with some people of questionable integrity. Now he is accused of some racist comments on Facebook.

James Troia participated in the following exchange with Foster on David Tyree’s Facebook page. Troia says the exchange, which he considers racist, occurred at about 9:30 a.m. yesterday.

D.L. Foster initiated the conversation with this statement:

Were the replies racially insensitive? You be the judge. 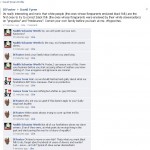 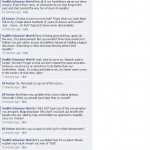 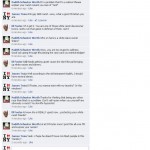 Why are you so upset if this doesn’t apply to you? Guilty dogs bark loudest.

White racists always trying to cover up their evil by accusing others.

Oh time to move on now huh? Thats what you want black folk to do, forget about hundreds of years of slavery and murder? Just… move… on huh? Typical of white slave owner descendants.

And that’s your problem that youre a latina jackass. Personally I think you should have kept that to yourself

If Foster’s statements were less sweeping and absolute, some of them might reflect valid concern about white hypocrisy. But he directs his accusations primarily at a commenter, Nadith Schuster Werth, who happens to be Latina and non-LGBT. Furthermore, the commenters show little sign of overt racism; Foster is blaming them for the sins of their alleged great-great-grandparents.

In an e-mail message to Truth Wins Out, Foster acknowledged the exchange.

Oh yes, I said all that and meant it.  Since you have the “screenshots” its all there. The race (slavery) issue was first raised over and over again on David Tyree’s “fan” page by white anti-Tyree posters. Go to the page and look. My comment(s) was in response to those accusations against David Tyree by white folk who incidentally repeatedly called him a plethora of profane names. No “outrage” about that.

As a black man whose foreparents were enslaved by whites in this county, I do think it odd and curious that whites —whose foreparents were the initiators, purveyors and defendants of the degrading and dehumanizing institution of slavery in America for almost a century—would be chastising a black man (as if he is still some sort of uppity field hand) about racism and slavery. Many black gays have spoken out about white gay racism which openly exists both in the gay community and is apparently immediately foisted upon the larger black community once a black man or woman speaks out against homosexual marriage. No “outrage” about that either.

One woman who claimed to be latina (Schuster Werth?) seemed to be the angry point man and probably thinks she will get 15 seconds of internet fame for “exposing” me. I say go for it and enjoy the faded glory. Perhaps,  she sees me, like David Tyree,  as another uppity nigger who got out of his place. So, per her, we should just “move on” and get over it.

I deleted the post(s) and removed myself from that forum to start a supportive page for David Tyree and Biblical marriage to which Im very proud to say is growing daily.

Foster claims to be the victim of white commenters, but Nadith Schuster Werth recalls the situation differently. She told Truth Wins Out:

The “conversation” started around 8 or 9am on 6/22. I had responded to his post claiming that White folk (whose forefathers owned slaves) have no business trying to educate black folks (whose forefathers were enslaved) on prejudice and intolerance. I responded by questioning why we can’t call him out on his hypocrisy. That’s when he started on his tirade about my forefathers being slave owners. I explained to him that I’m a Latina and my family wasn’t even in this country at that time. He then made the snide remark that being Latina was MY problem and I never should have mentioned it. I asked him twice to explain that comment and he never did. Just kept deflecting and calling me a white slave owner supporter. WTF?? Because I suggested that we need to move on and can’t live in the past. I never said forget our country’s sordid history of slave ownership. We must never forget in order to not repeat such atrocities but must move on and make it better for all. Logic is lost on that hateful “man” of God.

Despite the deletion of this conversation, David Tyree’s Facebook page remains peppered with incendiary comments from other sources.

Whatever the surrounding bedlam may have been, one responsibility of a public figure — especially a minister — is to rise above the fray. Foster’s characterization of others as “dogs” and “jackasses” renews my concern about his temperament and about his motivation for pressuring people into ex-gay therapy.

Foster’s comments in the Facebook exchange are consistent with a recent article which he wrote equating “progay clerics” with racists and slaveowners. And the comments are consistent with Foster’s past conduct. Starting soon after I first encountered him in 2003, Foster accumulated a record of unfortunate vitriol. This record was collated by Timothy Kincaid, who now writes for Box Turtle Bulletin. Keep in mind that this is not just a random antigay civilian commenting; it is a leader within Exodus Global Alliance and one of the nation’s best-known “ex-gay” pastors:

About the blog Ex-Gay Watch and its writers, Foster wrote:

“XGWers” sit around like a bunch of gossiping sissies, oops queers, disparaging people and their lives, wetting your pink panties laughing at the death of good men and mocking the faith of Christians who disagree with you. BUT when you get an ounce of xlax you fall apart. Typical for a hen house.

On gay pride and the “all the people”
Do you think ancient Sodom held gay pride parades? I think they did. Everyday. Regardless of how long this has been going on, it is still very strongly considered unnatural behavior. Thousands of years of social standards have excluded homosexuality from acceptable sexual activity… Millions of Americans are sick and disgusted at having to endure what they believe is an affront to God Almighty… I want to be the first to applaud the President for cutting off the flow of official recognition for such a shameful, political spectacle. This is what I call being President of all the people.

On gay pride and “all the people”:

Do you think ancient Sodom held gay pride parades? I think they did. Everyday. Regardless of how long this has been going on, it is still very strongly considered unnatural behavior. Thousands of years of social standards have excluded homosexuality from acceptable sexual activity… Millions of Americans are sick and disgusted at having to endure what they believe is an affront to God Almighty… I want to be the first to applaud the President for cutting off the flow of official recognition for such a shameful, political spectacle. This is what I call being President of all the people.

On antigay murders and beatings in Jamaica:

I have written before that so called homophobia is a justified reaction…In his powerfully written argument published in the Jamaica Gleaner, Dr. Leachim Semaj says “I take issue with the recent discussion describing Jamaican people who see homosexuality as dysfunctional or deviant as being sick people. This is what is done when one subscribes to the concept of “homophobia”…Dr. Semaj who has written for major outlets internationally, is on point with his commentary.

In 2006, Foster penned this article equating Truth Wins Out founder (whose family is Jewish) with a Nazi Final Solution. As a result, Exodus president Alan Chambers distanced his organization from Foster. Foster remained unapologetic.

That same year, Foster was hosted at an “ex-gay” conference organized by the virulently homophobic Bishop Eddie Long, who this month settled lawsuits filed by four young men who accuse Long of sexual abuse.

In 2008, while affiliated with Exodus Global Alliance, Foster advocated an ironic form of Christian anti-ministry, asserting that pastors should not refer people to Exodus International in the United States until it disavowed respectful interaction with sinners, such as that exemplified by ex-gay group leader Wendy Gritter. In other words, ministry isn’t valid if you actually, umm, minister to people.

In 2009, Foster launched a bizarre play that promoted “freedom” from homosexuality by trashing gay life. Southern Voice, a now-defunct Atlanta LGBT publication, said that “Once Upon a Dream,” liberally used the words “faggot,” “queer” and “abomination” in a negative way. The play was scheduled at the 14th Street Playhouse in Atlanta’s gay Midtown neighborhood.

Three months ago, Foster blasted Chambers for not being clear enough that all gay people are damned to hell.

Foster doesn’t seem to associate much with mainstream Christian pastors or leading antigay activists — or perhaps they don’t associate much with him? Foster seeks out the fringe: He defends Eddie Long’s alleged sexual abuses as a mere personal moral failing; misdiagnoses Eddie Long’s problem; he seeks counsel with Michael Brown; he describes the gay-tolerant third of American Christianity as a “disease“; and he demonstrates less interest in stopping antigay genocide in Uganda than in stopping Africa’s homosexuals.

Much as I sometimes prefer to ignore the fringe in the hope that they will go away, Foster has demonstrated staying power. Incitement and incendiary behavior remain effective means of drawing support, and of perpetuating the anti-ministry “ministry” industry.