From Our Department Of Sorely Missed Opportunities

What is life without regret?  Via Alvin McEwen, here’s one I’ll take to my grave…

Paul Cameron : ‘ Prop 8 trial was lost because supporters were scared to use my work’

In September of this year, [Paul] Cameron posted a long, rambling diatribe on his web page of his organization, The Family Research Institute, entitled  Prop 8 Decision — Triumph of ‘Scientifically Proven Sameness’.

Cameron’s theory that Germany didn’t loose World War I it was stabbed in the back by Jews and traitors at home the Proposition 8 defense lost because they didn’t use the good stuff, is one you had to see coming the moment the trial ended.  The anti-gay industrial complex lives in its own world, its own mutually self referencing echo chamber, where all their comfortable conceits regarding heterosexual superiority are never allowed to collide with the slightest bit of cold hard reality.  The instant they had to come out of that world and explain themselves in a court of law all their cherished fairytales went up in smoke.

Here’s a cartoon I did at the time… 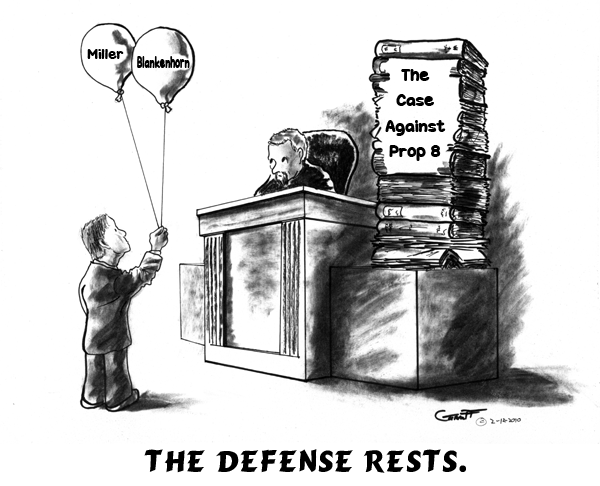 It was a moment gay Americans had been waiting decades for.  The sight alone, of so many straight media pundits scratching their heads at how utterly empty the anti-gay position actually is when you look at it closely was intensely satisfying.  Oh…did you think they were arguing in good faith…? But if you even tarried momentarily with the thought that this might cause the kook pews to reconsider things a bit, ask themselves an uncomfortable question or two about what they know and how they know it, perhaps even feel a twinge of shame over what they’ve been doing all these years to innocent people, you do not know the breed.

No, they fled right back into the echo chamber at speeds that would have made Einstein’s jaw drop, and started bellyaching that the rest of the world Can’t Handle The Truth… To be sure, homosexual activists have been building a ‘scientific case’ that homosexuality is irrelevant to marriage or successful child rearing — and also unrelated to child molestation, etc. — by publishing quasi-bogus conclusions appended to empirical studies in the journals of the major psychiatric professions, or by getting these associations to make exculpatory pronouncements. Consistent with Judge Walker’s legal argument, most of these studies purport to ‘prove’ that the outcomes and consequences of homosexuality are no different than the outcomes and consequences of heterosexuality.

Since a trove of such studies exist, then if what ‘science’ is is what gets published in peer-reviewed professional journals or declared by professional associations, the homosexuals ‘win.’ After all, homosexual sympathizers have generated more pro-gay conclusions based on social science studies than conclusions in studies that refute their ‘proof.’

And Guess Who Happens To Possess such a treasure trove of studies that refute their ‘proof’.  Go on…guess…

We at Family Research Institute (FRI), of course, have ‘skin in this game.’ As researchers, we have published more extensively on homosexuality in peer-reviewed scientific journals than any one else on ‘our side.’

Peer-reviewed scientific journals like Psychological Reports which is to peer review as due diligence was to banks during the mortgage bubble.  Or as Jim Burroway put it…

Of the thirty-four articles he’s published since 1986, all but five have appeared in the relatively obscure Psychological Reports. The others appeared in the journals Omega, Adolescence, Journal of Psychology, and the Journal of Biosocial Science.  All of these journals rank very poorly among social science journals according to Journal Citation Reports, which measures the importance of a journal according to how often articles in that journal are mentioned in other journals — and thus its “impact” among social scientists.  All of these journals rank in the lower half among social science journals.  Most of them, including Psychological Reports, rank near the bottom.Psychological Reports claims to be a peer-reviewed journal, although editor Doug Ammons adds that “no reviewer has a veto right.”  This is in sharp contrast to other, more respected peer-reviewed journals which will refuse to publish an article if serious objections are raised during the peer-review process.

Psychological Reports also differs from the other more respectable journals in another very important way: it charges its authors a fee $27.50 per page to publish. That’s why most professionals dismiss Psychological Reports as a “vanity journal,” one that will publish just about anything as long as the author is willing to pay the fee.

Let’s hear it for peer review.  I mean…what’s more peer then a wad of cold hard cash?

So Cameron’s complaint is that Proposition 8 lost at trial because the defense was too afraid to put him on the witness stand, where he would have stood up for Real Science not fake Social Studies Science and swept everyone off their feet with such scientific brilliance even teh gay would have had to admit He Speaks Truth About Homosexual.  I for one, truly regret this.  I will go to my grave sorry Paul didn’t get his day in court.  Really.  Honestly.  It would have been so absolutely Wonderful to watch Olson and/or Boies cross examine him.  A pair of lions ripping apart a hapless gazelle while Maggie Gallagher watches with a look on her face like she’s about to vomit.

In my dreams I can just picture it happening…starting with “Mr. Cameron, do you recall speaking to a group in Lincoln Nebraska during the time that city was considering adding sexual orientation to their human rights ordinance?  Do you recall telling them that a 4 year old boy had his genitals almost severed during a homosexual act in the restroom of the Gateway Mall…?”

“In a court of law you’ve got to come in and you’ve got to support those opinions, you’ve got to stand up under oath and cross-examination. And what we saw at trial is that it’s very easy…to make all sorts of statements and campaign literature, or in debates where they can’t be cross-examined.  But when they come into court and they have to support those opinions and they have to defend those opinions under oath and cross-examination, those opinions just melt away. And that’s what happened here. There simply wasn’t any evidence, there weren’t any of those studies. There weren’t any empirical studies. That’s just made up. That’s junk science. It’s easy to say that on television. But a witness stand is a lonely place to lie…” -David Boies