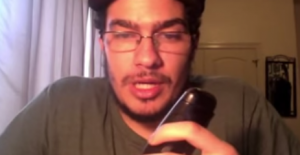 Yesterday, Peter LaBarbera triumphantly posted a series of anti-gay videos from Theodore Shoebat, son of extremist Christian convert Walid Shoebat, who believes that the GOP-led House Of Representatives has been infiltrated by the Muslim Brotherhood, and that “ISIS is truly the manifestation of the purest form of the homosexual agenda.” In the younger Shoebat’s videos, he records himself calling multiple bakeries, asking them to bake cakes for his “traditional marriage celebration,” decorated with the written message, “Gay marriage is wrong.” Clearly, the young man seeks to follow in the footsteps of known and easily debunked liar, convicted felon and activist James O’Keefe, who seeks to discredit political opponents by creating “gotcha” situations which supposedly expose them as hypocrites. Often, O’Keefe selectively edits videos in order to advance his agenda. In a memorable and humorous moment last year, O’Keefe released a video of himself dressed up as Osama bin Laden, wading across a narrow section of the Rio Grande.

In young Shoebat’s videos, which Peter LaBarbera calls the “smartest pro-family activism of 2014,” most of the bakeries refuse to participate in his hate speech, just as many of them have policies against making cakes of a sexual nature, etc. In one memorable call, he gets into a shouting match with a lesbian who actually comes off far better than Shoebat. She eventually agrees to write whatever he wants on his cookie, much as a person might silence a hysterical toddler by putting on “Yo Gabba Gabba.”

Truth Wins Out will be following up with a detailed explanation of nondiscrimination laws and how there is indeed a nuanced difference between a bakery’s refusal to make a cake for a wedding because the customers are gay and a refusal to participate in hate speech at a customer’s behest, hate speech which does not have anything to do with a person’s religious beliefs. We are one hundred percent certain that if a normal Christian customer called any of Shoebat’s targeted bakeries and asked for a cake for their Sunday School class, each and every one of them would respond joyfully and promptly.

However, Truth Wins Out wants bakeries around the nation, especially those owned or operated by LGBT people, to be aware that their establishments may be targeted next by young Shoebat or any number of other anti-gay people who find this idea clever. Normal people do not call bakeries asking for God Hates Fags cakes, so if your establishment receives that call, please be aware that the caller does not want a cake at all, but to make a bizarre political statement that plays into fantasies of victimhood at the hands of the “homosexual agenda.” These bakeries provide exemplary services to Christian people every day, which gives lie to the video’s claims that they don’t support tolerance or equality for people like him. Young Shoebat has clearly been radicalized by his disturbed father, to the point that he believes that the ultimate goal of the LGBT rights movement is “conquest, and the persecution of Christians,” and that “if [those fighting for equality] succeed, we will live under an outright Homosexual inquisition, and if they really had their way, they would build a homosexual empire.”

If your bakery receives a call like this, Truth Wins Out recommends that you respond not in anger, but simply humor them. They will eventually get tired and hang up.